US Trade Deficit Widened in August to $54.9 Billion

The deficit had fallen in June and July but is still up for the year despite President Trump’s attempts to push it down with taxes on imports and waging a trade war with China. 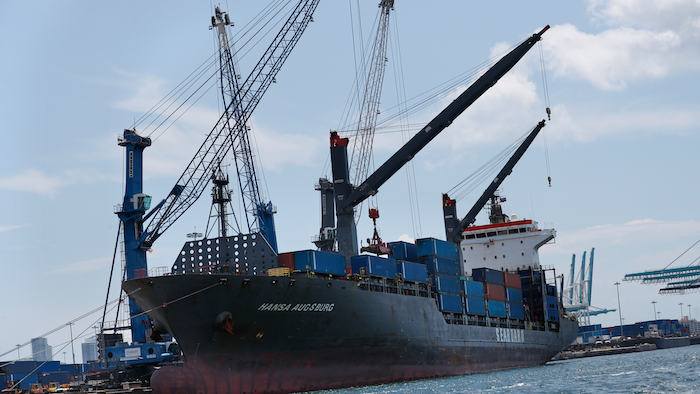 WASHINGTON (AP) — The U.S. trade deficit widened in August for the first time in three months as exports increased but imports increased more. The politically sensitive gap with China in the trade of goods narrowed.

The Commerce Department said Friday that the gap between what the United buys and what it sells abroad rose 1.6% to $54.9 billion from $54 billion in July. The deficit had fallen in June and July. But it is still up for the year despite President Donald Trump’s attempts to push it down by imposing taxes on imports and waging a trade war with China.

Exports blipped up 0.2% in August to $207.9 billion. Imports increased 0.5% to $262.8 billion on a big increase in shipments of cellphones, which are scheduled to be hit with new tariffs in December as part of the standoff with China.

The U.S. and China are locked in a dispute over American allegations that Beijing uses predatory tacitcs _ including outright cybertheft _ in a drive to supplant U.S. technological dominance. Trump has slapped tariffs on more than $360 billion in Chinese imports and is planning to hit another $160 billion in December. China has retaliated with its own tariffs on American products.

U.S. and Chinese negotiators are expected to meet for the 13th time next week to try to resolve the dispute, which has shaken global financial markets and cast gloom over the world economy.

In addition to sparring with China, Trump also has imposed import taxes on foreign steel and aluminum and is threatening to tax imported autos too.

Trump views America’s persistent trade deficits as a sign of economic weakness and the result of unfair trade agreements.

Mainstream economists say the trade gap is the product of economic forces that don’t respond much to changes in trade policy: Americans consume more than they produce, and imports fill the gap. A persistently strong U.S. dollar _ it’s up about 1.7% this year against the currencies of U.S. trading partners _ also puts American exporters at a price disadvantage in foreign markets.

In August, the United States recorded a $74.4 billion deficit in the trade of goods such as cars and appliances. But it ran a $19.5 billion surplus in the trade of services such as banking and education. The services surplus was the lowest since February 2016; services imports hit a record $49.8 billion in August.