Global oil prices fell on the news as forecasts predict a coming economic slowdown and a renewed supply glut. 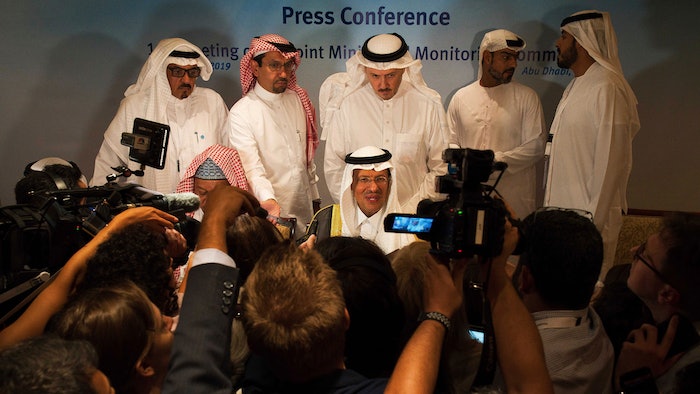 ABU DHABI, United Arab Emirates (AP) — OPEC and its non-cartel allies on Thursday discussed further cuts to oil production and the possibility of Iran re-entering the global market but said that any decision would have to wait for a meeting in December. Global oil prices fell on the news as forecasts predict a coming economic slowdown and a renewed supply glut.

Officials at the Organization of the Petroleum Exporting Countries committee meeting held in Abu Dhabi, including new Saudi Energy Minister Prince Abdulaziz bin Salman, sought to stress the group remained committed to stabilizing the market through a package of cuts that began in 2017.

However, Iraq and Nigeria openly acknowledged going beyond their allotments while promising further cuts. Estimates similarly show Russia, another heavyweight outside of OPEC, going beyond its allotments. Meanwhile, Saudi Arabia continues its "extra-voluntary reductions," Prince Abdulaziz said. A statement by the committee said that there was 136 percent compliance with the accord last month.

The prince said there would be "no half-cooked transparency" under his watch, while going out of his way to repeatedly praise those involved in the deal. "It was productive, it was fruitful, it was transparent and more importantly every participant did see that there is a role to play and a way to improve this endeavor," Prince Abdulaziz told journalists after the meeting.

Benchmark Brent crude traded at $60 a barrel after the meeting ended. Before the meeting started, it was trading above $61. Crude oil sold for over $100 a barrel in the summer of 2014 before bottoming out below $30 a barrel in January 2016. That fall largely came from a boom in U.S. shale oil and countries like Saudi Arabia keeping their production high to hold onto market share.

Hoping to boost prices, OPEC partnered with non-OPEC nations like Russia to lower their production beginning in 2017, the first such cut for the cartel in a decade. It reduced production by 1.2 million barrels per day, with 800,000 coming from OPEC and 400,000 coming from non-OPEC members. That deal helped push prices back up, becoming what Prince Abdulaziz earlier this week described as an arrangement "'til death do us part."

But the accord does not include America, which was the world's top oil producer in 2018, according to the U.S. Energy Information Administration. President Donald Trump has been pushing both OPEC and ally Saudi Arabia in tweets to keep prices low as well, mindful of how gasoline prices can swing elections in America. The average price for a gallon of regular gasoline in the U.S. is $2.56, down from $2.83 a year ago, according to AAA.

The Paris-based International Energy Agency said in a report Thursday released during the meeting that the U.S. momentarily even overtook Saudi Arabia in June as the world's No. 1 gross oil exporter. It's "a reminder to the producers that competition for market share is getting tougher," the IEA said.

It added that growth continued to weaken amid "uncertainty around the global economy, and particularly trade." That's a nod toward the trade war between China and the U.S., which has seen billions of dollars in tariffs levied between them. "The challenge of market management remains a daunting one well into 2020," the agency said.

That was a sentiment echoed by analysts.

"A combination of new tariffs being imposed by China and the U.S., weakening data from major economies and uncertainty over the next steps from central banks all worked to weigh on the outlook for crude oil, particularly for demand in the coming months," wrote Edward Bell, an commodities analyst for Dubai-based Emirates NBD.

Tensions between Iran and the U.S., while sparking temporary spikes in the oil market, have not caused sustained higher prices. Asked about whether a thaw between the U.S. and Iran could affect energy markets after Trump's firing of national security adviser John Bolton, Prince Abdulaziz said the committee spoke about it.

"That time when that situation prevails, we will look at the assessment," he told journalists. "If the issue of addressing them requires certain measures, all these certain measures will be reviewed." Venezuelan Petroleum Minister Manuel Salvador Quevedo Fernandez similarly criticized, linking him to the oil sanctions crushing the South American country's economy during its political turmoil.

"They are against our Venezuelan people," he said. "These measures damage our economy." But a possible further cut, while it could boost prices, could hurt the ones who need the money most. OPEC-heavyweight Saudi Arabia, which noticeably has cut into its production to help sustain the deal, needs more oil revenue to help support Crown Prince Mohammed bin Salman's ambitious "Vision 2030" plans.

But Prince Abdulaziz seemed to acknowledge a further cut could be in the cards, though he stressed any decision would come during OPEC's December meeting in Vienna. "We are going to carry our voluntary reductions to end of year and definitely we will have the meeting in December," he said. "I don't want to preempt the conference."

Among other reasons, "the workforce is well-trained by vocational schools and specialized education programs."
Jun 20th, 2022
Follow Us
Most Recent