Foreign competitors currently have an advantage due to 20 percent or higher taxes being levied on American beef, pork and some cheeses. 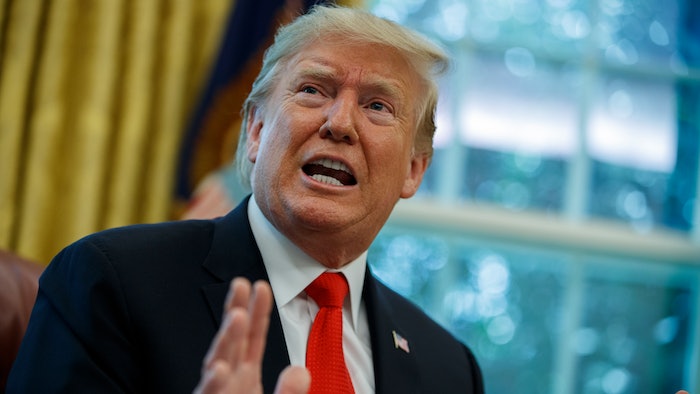 WASHINGTON (AP) — American farmers have not only endured retaliatory tariffs from China and other nations, they've watched as most of their top foreign competitors used free trade agreements to make inroads into Japan, a historically protectionist market with nearly 127 million consumers.

Now they're wondering if the coming U.S.-Japan trade deal that President Donald Trump is showcasing will be as strong for farmers as the Trans-Pacific Partnership, which was negotiated under President Barack Obama and ditched by Trump as soon as he took office. When Trump bailed on TPP, competitors such as Canada, Mexico and Australia forged ahead with a revamped version of the trade deal. Not wanting to be left out, the European Union reached its own free trade agreement with Japan. Both agreements went into effect at the beginning of this year.

The result: Top foreign competitors to American farmers get a pricing advantage after taking into account the 38.5 percent import tax that is applied to American beef, the 20 percent tariff applied to American ground pork and the 40 percent duty applied to some cheeses. The changes have contributed to a new trade landscape that saw U.S. farm exports to Japan drop two percent to $6.5 billion in the first six months of this year compared with the same period last year, according to the Agriculture Department.

"We've taken a temporary step backward because our competitors have had better access than us," said Nick Giordano, a vice president at the National Pork Producers Council. Giordano is hopeful that dynamic will change soon. The president, in need of some wins on the trade front, has said the U.S. and Japan have agreed in principle on a new trade pact that the two parties hope to make official later this month.

Trump announced the agreement a couple of days after he raised retaliatory tariffs on China and ordered American companies to consider alternatives to doing business there, moves that contributed to significant drops in the financial markets. "We've agreed to every point, and now we're papering it and we'll be signing it at a formal ceremony," Trump said.

Trade talks involving the Trump administration tend to be subject to fits and starts. Farm groups are hoping for no setbacks. "Japan is very important to us," Giordano said, calling it pork producers' largest-value market year in and year out. He added: "We're losing sales to our EU and TPP competitors. So we're just really real eager to get back to a level playing field there and this deal is going to do it."

For all of Trump's criticism of Obama's TPP, it's unclear whether Trump will be able to secure better terms than the ones farmers would have gained under Obama. The American Farm Bureau Federation had projected that TPP would have increased net farm income by $4.4 billion annually.

Japanese officials are optimistic the two sides can reach a deal in time for the U.N. General Assembly later this month in New York. They are hoping for an agreement that gives Japan relief from the import taxes Trump slapped last year on foreign steel and aluminum and from the tariffs he's threatened to impose on auto imports. In return, American farmers would get the kind of increased access to the Japanese market they would have received under TPP.

U.S. beef has continued to enjoy strong sales in Japan this year. Kent Bacus of the National Cattlemen's Beef Association said a drought in Australia is limiting that nation's ability to export more beef. Still, he said the tariff paid for Australian beef, now at 26.6 percent versus 38.5 percent for U.S. beef, is going to encourage Japanese importers to look at other sources, including Canada, New Zealand and Mexico.

"Essentially, we're living on borrowed time," Bacus said. Groups representing wheat and dairy farmers offered similar assessments that they too could soon expect to lose market share if the U.S. doesn't get the same terms from Japan as do top foreign competitors. They're hoping that once an agreement with the Japanese is signed, it will go into effect without the need for congressional approval. They don't want to wait months, if not years, for a congressional vote.

"We really get our bell rung if we have to wait and compete at a disadvantage for the next couple years in the Japanese market," Giordano said.