The move has already set off a series of reactions hurting their relations. 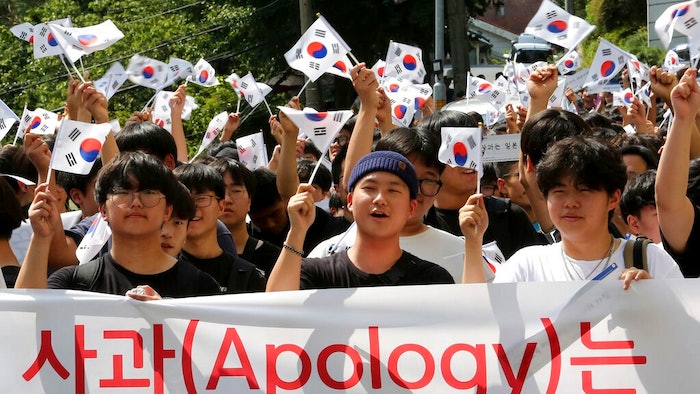 TOKYO (AP) — Japan's downgrading of South Korea's trade status took effect Wednesday, a decision that has already set off a series of reactions hurting their relations.

Japanese manufacturers now must apply for approval for each technology-related contract for South Korean export, rather than the simpler checks granted a preferential trade partner, which is still the status of the U.S. and others.

Since Japan announced the decision about two months ago, South Korea decided to similarly downgrade Tokyo's trade status, which will take effect next month. Seoul has also canceled a deal to share military intelligence with Japan.

South Korea has accused Japan of weaponizing trade because of a separate dispute linked to Japan's colonial rule of the Korean Peninsula from 1910 to 1945.

"Relations between Japan and South Korea continue to be in an extremely serious situation because of South Korea's repeated negative and irrational actions, including the most critical issue of laborers from the Korean Peninsula," Japanese government spokesman Yoshihide Suga told reporters.

Suga said Japan will continue to try to talk to South Korea.

"Members of the Japanese leadership are talking as if South Korea is an untrustworthy country that does not follow international law," he said.

The wrangling has dented what had been a thriving tourism and cultural exchange between the neighboring nations, including Japanese becoming fans of Korean pop music and movies. Some South Koreas are boycotting Japanese goods or joining street protests against Japan.

Hiroshige Seko, Japan's minister of economy, trade and industry, said earlier this week that the trade status review was needed for proper checks on exports because of concerns they could be used for military purposes.

Japan has never specified the security concerns or how they originated.

The intelligence-sharing agreement remains in effect until November. Japan and South Korea have shared information about North Korea's missile launches, the latest of which happened Saturday.

Kim, the South Korean official, said it was Japan that started linking trade restrictions with security questions, and pointed to how South Korea is willing to reconsider if Japan retracts its decision in the next few months.

"I want to stress that the ball is now in Japan's court," said Kim.