Among the concerns are a decrease in the availability of fresh food, and fresh water shortages due to possible interruptions of water treatment chemicals. 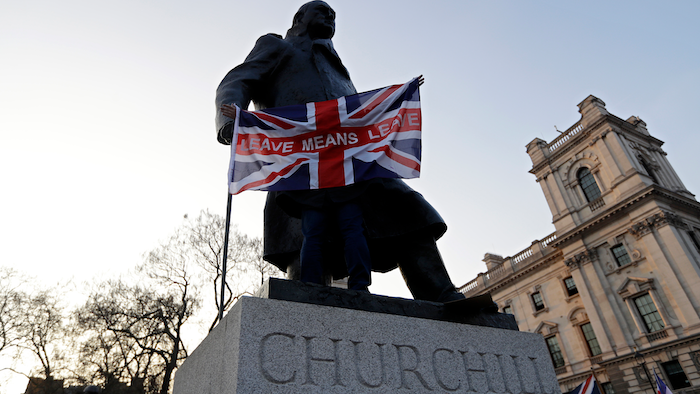 LONDON (AP) — Secret British government documents have warned of serious disruptions across the country in the event that the U.K. leaves the European Union without a trade deal on October 31, according to a report.

The Sunday Times newspaper published what it said was what the British government expects in the case of a sudden, "no-deal" Brexit. Among the most serious: "significant" disruptions to the supply of drugs and medicine, a decrease in the availability of fresh food and even potential fresh water shortages due to possible interruptions of imported water treatment chemicals.

Although the grim scenarios reportedly outlined in the government documents have long been floated by academics and economists, they've been repeatedly dismissed as scaremongering by Brexit proponents. British Prime Minister Boris Johnson has said he is ready to leave the EU regardless of whether he is able to renegotiate the Brexit deal struck with Brussels by his predecessor, Theresa May.

His own officials, however, have warned that with a no-deal Brexit, the sharing of law enforcement data and the health of Britain's crucial financial services industry could be in jeopardy after October 31.

The documents published by the Times also quote officials as warning that up to 85 percent of all trucks wouldn't be ready for French customs at the critical English Channel crossing that day, causing lines that could stretch out for days. Some 75 percent of all drugs coming into Britain arrive via that crossing, the memos warned, "making them particularly vulnerable to severe delays."

The officials foresee "critical elements" of the food supply chain being affected that would "reduce availability and choice and increase the price, which will affect vulnerable groups." Britain's Cabinet Office didn't return a message seeking comment on the documents, but Michael Gove, the British minister in charge of no-deal preparations, insisted that the files represented a "worst case scenario."

Very "significant steps have been taken in the last three weeks to accelerate Brexit planning," he said in a message posted to Twitter.

But the documents, which are titled "planning assumptions," mention a "base scenario," not a "worst case" one. The Times quoted an unnamed Cabinet Office source as saying the memos were simply realistic assessments of what was most likely to happen. The opposition Labour Party, which is trying to delay Brexit and organize a government of national unity, held up the report as another sign that no-deal must be avoided.

"It seems to me is what we've seen is a hard-headed assessment of reality, that sets out in really stark terms what a calamitous outcome of no-deal Brexit would mean for the United Kingdom," lawmaker Nick Thomas-Symonds told Sky News television. "The government is reckless in the way it's been pushing forward with no-deal planning in this way."

In Germany, Chancellor Angela Merkel said the country is ready for Brexit, even without a deal to smooth the transition. Merkel said Sunday during an open house at the chancellery in Berlin that she would "try everything in my power to find solutions" and that "I believe that it would be better to leave with an agreement than without one."

But she added that "should it come to that we are prepared for this eventuality too."

David McHugh contributed to this report from Frankfurt, Germany.