American Woolen Company Inc. is one of a handful of wool manufacturers left in the country. 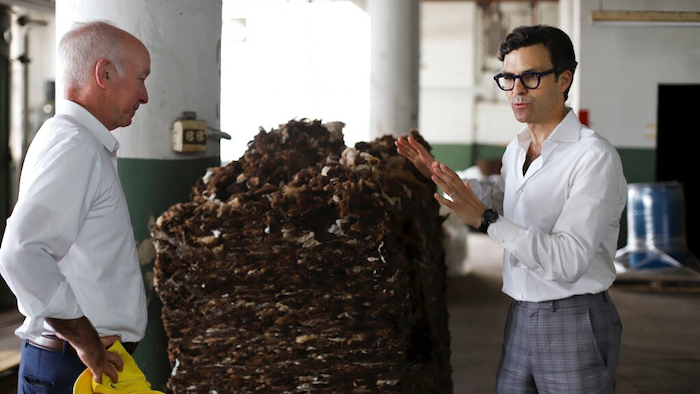 American Woolen Company Inc. is one of a handful of wool manufacturers left in the country, but with a recent military contract and by providing high-quality fabrics to fashion manufacturers like Timberland, The North Face and J. Crew, the company is looking to help bring back made-in-America products.

Jacob Harrison Long, the chief executive officer of the Stafford Springs-based company — and a former banker of 22 years who has worked around in cities like London, Frankfurt, Milan and Paris — said he thinks there is demand around the world for high-quality American-made products.

"I really believe there is craftsmanship coming back to America," he said, adding that purchasing the mill is a "golden opportunity" for growth.

"This is one of America's last mills ... and the idea for us is to create something in Connecticut that can make 'Made-in-Connecticut' pretty powerful," he said.

One of those examples is the contract American Woolen has to provide the fabrics that will be used to produce the Army's new classic-looking military uniforms, reminiscent of those worn by soldiers and officers over a half-century ago.

Long said he thinks the look is meant to harken back to a time where military men and women were "very well-dressed."

While the cost will initially be higher due to the higher quality of the material, the uniforms will last much longer and be more durable than current camo-style fatigues.

The American Woolen Co. and Burlington Textiles, based in North Carolina, are the two companies that have contracts to supply the fabrics for the new military uniforms.

American Woolen gets many of its fabrics from domestic sources across the country. Its alpaca wool comes from New England, with other wool coming from the West and Southwest, including Texas, Wyoming, Colorado, Montana, Idaho and Utah.

Long stressed that is not a "designed in New York, made in China" style — but designed and made in Stafford Springs idea.

The 19th-century wool mill was originally home to Warren Mills since 1853 and operated until the late 1980s. Then an Italian textile company ran it until it closed the mill in 2013 and laid off the remaining roughly 80 employees.

Long bought the mill in 2013 and said it is one of three wool mills still in the country. Around the turn of the 20th century, he said, there were 300 wool mills nationwide.

Since the mill employed many people in Stafford Springs, Long tried to employ as many as he could, hiring back 45 of the former mill workers. He currently has a staff of 69 but is looking to increase that number by 20.

Finding workers is difficult because of the unique nature of the work, he said.

"You're trying to rebuild an industry," he said. "It's very niche marketing."

During a tour of the mill Wednesday, U.S. Rep. Joe Courtney, of Connecticut, said officials have been doing what they can to help the company succeed, including a $100,000 grant from the state Department of Economic and Community Development and a $300,000 loan to help kickstart operations.

Courtney, who sits on the House Armed Services Committee, said the military contract is important, not only for Connecticut and to supply American manufacturing jobs, but also because having products made in the United States helps alleviate any national security issues.

The Department of Defense is limited by law to purchasing and using materials from domestic products, he noted.

The tentative rollout for the uniforms could come as early as spring 2020.

"You can buy a fabric anywhere — there's some beautiful mills in Turkey and Vietnam and China — but nobody has what we have here, which is a distinctive New England style aesthetic," Long said. "The New England color palette, the colors of Nantucket, the colors of the flora and fauna, (it's) what makes New England great."

Chris Ehrmann is a corps member for Report for America , a nonprofit organization that supports local news coverage, in a partnership with The Associated Press for Connecticut. The AP is solely responsible for all content.