Ministry spokesman Gao Feng said Thursday that its "core concern" over mutual respect has to be properly accommodated. 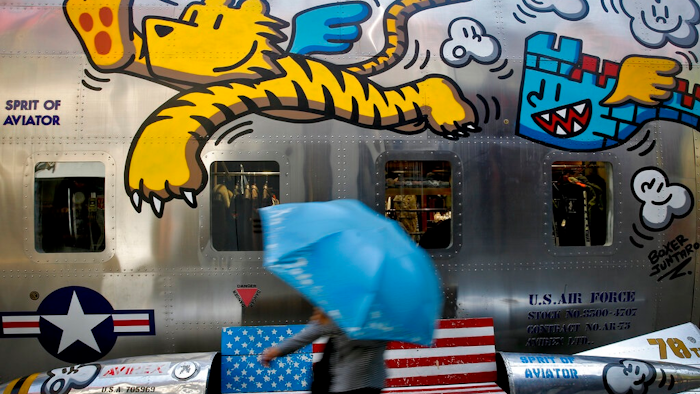 In this May 13, 2019, file photo, a woman walks by a bench painted with an American flag outside a fashion boutique selling U.S. brand clothing at the capital city's popular shopping mall in Beijing. China's Commerce Ministry said Thursday, June 20, 2019, that officials on both sides are preparing for a meeting of Presidents Donald Trump and Xi Jinping in Osaka, but that threats and tariffs will not resolve trade tensions between the two biggest economies.
AP Photo/Andy Wong, File

BEIJING (AP) — China warned Thursday that threats and tariffs will not resolve trade tensions between the two biggest economies and blasted Republican Sen. Marco Rubio for his criticism of technology giant Huawei over patents.

Ministry spokesman Gao Feng said Thursday that its "core concern" over mutual respect has to be properly accommodated.

"If the US insists on taking unilateral trade measures against China, it will definitely bring serious impacts on the economy of itself and the welfare of its people," Gao said in a routine briefing.

Trump and Xi are due to meet at a summit of the Group of 20 on June 28-29. It's unclear when the two countries' negotiating teams will resume detailed talks, which stalled in May when the U.S. accused China of reneging on earlier commitments.

The talks are aimed at ending the dispute over trade and technology that has resulted in Trump imposing 25% tariffs on $250 billion worth of Chinese exports and considering expanding those tariffs to include another $300 billion of Chinese products.

The Wall Street Journal reported last week that Huawei is asking U.S. phone carrier Verizon to pay licensing fees for more than 200 of its patents. While Huawei declined to comment on the matter, company spokesman Joe Kelly said it will hold a briefing later this month on being more aggressive about collecting intellectual property licensing fees.

Rubio filed an amendment to the U.S. defense authorization bill this week that would prevent Huawei Technologies and other companies on security watch lists from pursuing damages in U.S. patent courts. That followed a move by Huawei to seek $1 billion in damages it says it is owed in unpaid patent licensing fees, reports said.

"We know that someone in the U.S. leaves no stone unturned to smear and suppress other countries' enterprises, yet we did not expect that they would so blatantly manipulate the laws and rules," said the spokesman, Lu Kang.

"This not only damages the reputation and image of the U.S. but also harms its own companies in the long run."

The U.S. has accused Chinese companies such as Huawei of committing forced technology transfers and stealing trade secrets. Last month, the U.S. placed Huawei on its "Entity List," which effectively bars American companies from selling components to Huawei without government approval.

Washington claims Huawei poses a national security threat because it may be beholden to China's ruling Communist Party. But American officials have presented no evidence of any Huawei equipment serving as intentional conduits for espionage by Beijing. Huawei's placement on the Entity List is widely seen as intended to persuade resistant U.S. allies in Europe to exclude Huawei equipment from their next-generation wireless networks, known as 5G.

Huawei founder Ren Zhengfei has denied that Huawei would share user data with the Chinese government if ordered to do so.

On Monday during a panel discussion opened to the media he said there are no backdoors in Huawei's equipment that anyone could access, and that Huawei is willing to enter into a "no backdoor" agreement with any nation that wants one.

Huawei brought a lawsuit in the U.S. this March challenging the constitutionality of a national security law which prevents the U.S. government and its contractors from using Huawei equipment. The complaint, filed in Plano, Texas, where Huawei's American operations are headquartered, alleges that the law singles out Huawei for punishment while denying the company due process.

Ren said during the panel discussion that Huawei will not use its many patents as a "weapon," but did not rule out seeking royalties for usage.