Investors are hoping for any positive sign in the trade war between the world's largest economies. 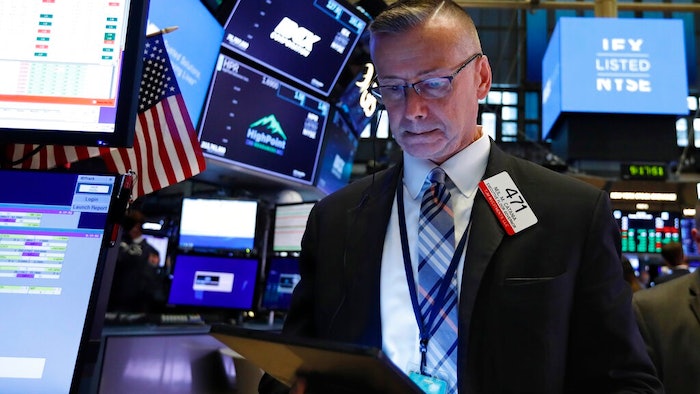 Trader Neil Catania works on the floor of the New York Stock Exchange, Tuesday, June 18, 2019. Stocks are opening higher on Wall Street following big gains in Europe after the head of the European Central Bank said it was ready to cut interest rates and provide more economic stimulus if necessary.
AP Photo/Richard Drew

NEW YORK (AP) — Stocks rose sharply on Wall Street Tuesday as traders cheered news that the leaders of the U.S. and China will meet face-to-face next week to discuss their long-running trade dispute.

President Donald Trump said he will hold talks with Chinese President Xi Jinping at a summit of nations in Japan. Investors are hoping for any positive sign in the trade war between the world's largest economies. U.S. businesses have implored Trump to stop escalating the trade war and refrain from expanding his tariffs to $300 billion on goods from China.

European markets jumped after the head of the European Central Bank said it was ready to cut interest rates and provide other economic stimulus if necessary. That puts the spotlight on the Federal Reserve, which is set to announce its own decision on interest rates Wednesday.

Industrial and consumer-related stocks also made big gains. General Electric, Caterpillar, and Nike all rose. Utilities and consumer products companies lagged the market in a sign that investors were stepping back from the safe-play sectors and taking on more risk.

FACEBOOK GOES CRYPTO: The social media company rose 1.1% after unveiling plans to create a new digital currency similar to Bitcoin for global use.

The new currency, called Libra, has the potential to drive more e-commerce on its services and boost ads on its platforms. Facebook is partnering with PayPal, Uber, Spotify, Visa and Mastercard on the system.

BONDS: U.S. government bond prices rose sharply, sending yields lower. The yield on the 10-year Treasury note fell to 2.04%, below the 2.08% it traded at late Monday. That's still well below the 2.20% yield on the three-month Treasury bill.