Huawei Warns U.S. Would Hurt Itself by Cutting Off Tech Ties

Some cybersecurity experts say that Washington will only further encourage China to become more technically self-reliant. 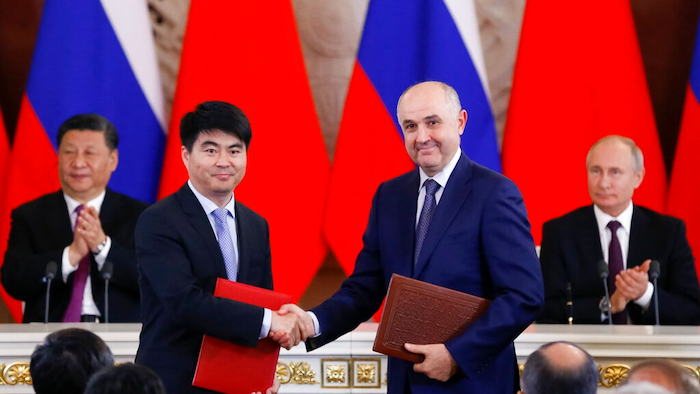 ST. PETERSBURG, Russia (AP) — A senior executive for Chinese technology giant Huawei said Thursday that he hopes the company's animosity with the United States will be resolved and warned that the U.S. would be shooting itself in the foot if it were to shun Chinese technology.

Mika Lauhde, Huawei's vice-president for cybersecurity and privacy, told The Associated Press that he hopes for a "positive resolution" of the standoff with the U.S. government and added that his company is not the "nucleus of the issue," pointing to the wider trade war between the U.S. and China.

The U.S. has imposed sanctions against the world's No. 1 network equipment provider and second-largest smartphone maker, arguing that it is legally beholden to the Chinese government, which could use the company's products for cyberespionage. Huawei denies these accusations.

Lauhde said he doesn't think that the U.S. will be severing all ties with Huawei and other Chinese technology companies, as that would be "driving itself into a corner."

"If they are disconnecting themselves from everybody, that's (going to) happen vice versa as well," he said, alluding to possible Chinese reaction.

Some cybersecurity experts say that Washington, by going as far as warning other countries against working with Huawei actions, will only further encourage China to become more technically self-reliant and will be dividing the world into two tech camps.

Lauhde rejected suggestion of a full split in the tech industry.

Technical ties between China and Russia, for one, are expanding. Russia's major mobile operator MTS and Huawei on Wednesday announced a deal to jointly develop 5G networks in Russia. Putin and Chinese President Xi Jinping attended the ceremony at the Kremlin.