Under the new measure, software and integrated circuit companies founded by the end of 2018 will owe no income tax for two years. 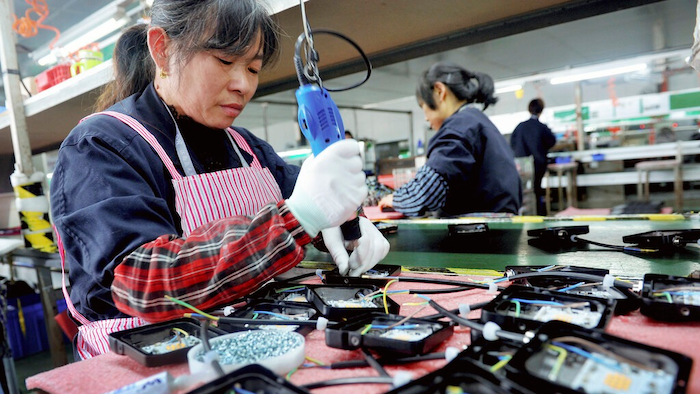 In this Saturday, March 30, 2019, file photo, workers assemble LED lights at a factory in Yushan county in central China's Jiangxi province. China is cutting taxes on its fledgling software and integrated circuit industries to spur development in the face of U.S. export controls that threaten to handicap Chinese tech companies.
AP Photo, File

Most smartphones, tablet computers and other electronics are assembled in China. But its manufacturers usually use U.S., Japanese or Taiwanese microchips and other components. Beijing is developing its own suppliers to capture more of the industry's profits and reduce what the ruling Communist Party sees as a security risk in relying on foreign vendors.

Integrated circuits, or microchips, are among technologies China has targeted for state-led development in official plans that helped to ignite Beijing's tariff battle with President Donald Trump.

The United States, Europe, Japan and other trading partners say those plans violate China's market-opening obligations. Chinese officials have offered to alter details but are unlikely to abandon a strategy they consider a path to prosperity and global influence.

Under the new measure, software and integrated circuit companies founded by the end of 2018 will owe no income tax for two years and the rate will be cut by half for three years after that, the Finance Ministry said.

Its two-sentence statement gave no details. But the top economic official, Premier Li Keqiang, said May 8 policies to promote the industry would apply equally to foreign-financed and Chinese companies.

Beijing has spent billions of dollars over the past two decades on research subsidies and importing technology, sometimes using tactics that have angered Washington and other governments.

Trump vetoed the 2017 acquisition of an Oregon tech company, Lattice Semiconductor, after it became clear the buyer was financed by the Chinese government.

Washington imposed a seven-year ban on technology sales to ZTE over its exports to Iran and North Korea. Trump agreed to restore access after ZTE agreed to pay a $1 billion fine and replace its executive team.

One measure of how far China needs to go to supply its own technology needs is industry analysts' warnings about how many U.S. suppliers may be battered by the loss of Huawei Technologies Ltd. as a customer. They include industry leaders Micron Technologies, Qualcomm, Qorvo, Skyworks Solutions, Xilinx, Broadcom and Texas Instruments.

The Trump administration's order last week will reduce or eliminate Huawei's access to American chips and Google, which provides the Android operating system and services for its smartphones.

Vendors are required to obtain government permission for technology sales to Huawei. The Commerce Department said it granted a 90-day exemption for some technology to minimize the impact on rural phone carriers that use Huawei equipment.

Huawei, China's first global tech competitor, has developed its own chips for smartphones, servers and artificial intelligence. But it needs American components for its top-line phones, network gear and other products.

Huawei founder Ren Zhengfei said Tuesday the company has "supply backups" if it loses access to American components. He said Huawei was talking to Google about possible "emergency relief measures" for its smartphones but gave no details.