Inside One of Amazon's Warehouses

More than 10 miles of conveyor belts weave through the building. 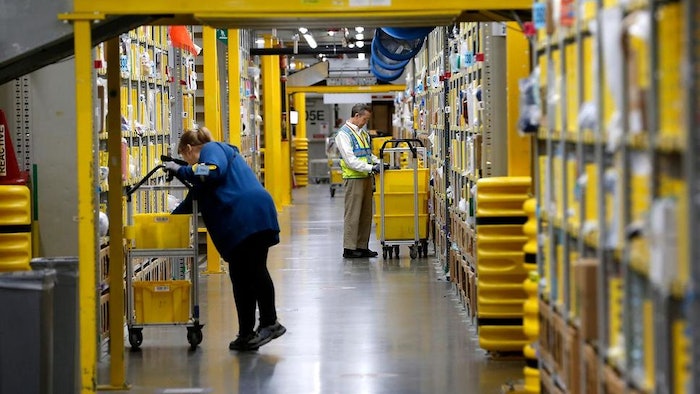 At about 1.2 million square feet — roughly the size of 28 football fields — the fulfillment center stores, packages and ships what Amazon officials would only describe as "tens of millions" of products. More than 10 miles of conveyor belts weave through the building.

"We are shipping hundreds of thousands (of orders) a day," said Dan Miller, general manager of the Chesterfield fulfillment center.

While the speed of shipment varies by product, "we can turn around a package and get it on a truck in under two hours," he said.

The Chesterfield facility has 2,200 employees, a number that can swell by as much as 1,000 seasonal workers during the peak of the holiday shopping season.

Amazon opened the center in the Meadowville Technology Park and another one in Dinwiddie County in late 2012, investing more than $135 million. Since then, the company has added other operations in the Richmond region and around Virginia.

In 2017, Amazon leased a 328,000-square-foot building on Lakeridge Parkway in the Enterchange at Northlake business park in Hanover County to serve as a package sorting facility employing about 300 people.

The company said it now employs more than 8,500 people in Virginia, including at its facilities in the Richmond region and in Virginia Beach and Springfield.

As its presence grows in Virginia and the Richmond region, the online retail giant is opening its doors to let more people see what happens behind the scenes in its order fulfillment operations.

The company is now offering more public tours of its massive fulfillment center in Chesterfield, one of 175 fulfillment centers the Seattle-based company operates to store, package and ship the vast quantities of products that customers order from the company every day.

For the past five years, Amazon has held four tours a month at the Chesterfield fulfillment center, and about 11,400 people have visited the site.

Under an expanded program being offered at 23 Amazon facilities in the United States and Canada, the number of tours is increasing tenfold.

The Chesterfield site is offering two tours a day, Monday to Friday.

"I think it is a phenomenal experience to get out and see one of these fulfillment centers, to see what the scale is, and meet the people who are behind all that hard work that goes into making the magic happen in getting that box to your doorstep," Miller said.

A recent walk through the facility on a media tour revealed items in the "stow" area ranging from bottled soap to Bisquick. The stow area is a vast array of tall shelves where items are stored before shipping.

Amazon has made some investments in technology upgrades at the Chesterfield facility, most recently in a new robotic arm that palletizes totes, and in an expanded package sorting system that helps speed delivery times.

While the fulfillment center can ship orders anywhere, Amazon's recent announcement that it was expanding its one-day shipping option for its Prime member customers means the local plant is seeing some of its volume shift more toward shipping orders within a 300-mile radius.

"We really kicked up more of that volume about two weeks ago," said Miller, a Marine Corps veteran who joined Amazon eight years ago as an entry-level manager.

Miller has been working at the Chesterfield site for 13 months and became general manager in January.

While Amazon relies on computer algorithms to manage its orders, logistics and shipping, much of the work at the fulfillment centers is still being done the old-fashioned way, by people.

It's the work of "stowers" like Glenn Frith to make sure the millions of items in the facility are stored in a way that they can be most efficiently retrieved when an order is placed.

"The critical part is we have to make sure the process guarantees an exact match, virtually and physically, for what we are stowing," said Frith, a Hopewell resident who joined Amazon five years ago after retiring from a 35-year career in public administration and in substance-abuse prevention.

"It is a very precise process," Frith said. "Amazon has an extraordinarily high standard for accuracy. They also give us the skillset and tools to achieve that."

When an order is placed, it is routed to "pickers" such as Brooke Pizzetti, who walk among the shelves with yellow totes to fetch ordered items that are then sent to packaging.

"One of Amazon's innovations is they have these algorithms that direct you to the right place," said Pizzetti, who commutes from Gloucester to work at the warehouse.

"A lot of the innovations that you see in the center — the way that we process stuff — actually comes from the associates," she said.

More information about tours of Amazon facilities in North America can be found online at www.amazonfctours.com.