Proposed legislation requires oil shipped by rail to have more of its volatile gases removed, but not everyone is on board.

Blake Nicholson
This Nov. 6, 2013, file photo, shows a warning placard on a tank car carrying crude oil near a loading terminal in Trenton, N.D. North Dakota officials are pressuring the state of Washington to back off from legislation requiring oil shipped by rail to have more of its volatile gases removed. Proponents of the bill awaiting Gov. Jay Inslee's signature say it will boost safety, but North Dakota officials worry it could hamper the nation's No. 2 oil producer. North Dakota's three members of Congress have asked Inslee to veto the bill. North Dakota regulators are considering a lawsuit.
AP Photo/Matthew Brown, File

BISMARCK, N.D. (AP) — North Dakota officials are pressuring the state of Washington to back off from legislation requiring oil shipped by rail to have more of its volatile gases removed, urging the governor to veto the bill and promising a lawsuit if he doesn't.

The bill awaiting Gov. Jay Inslee's signature requires a lower vapor pressure limit for crude shipped by rail than either North Dakota requirements or industry standards. Violations could result in fines of up to $2,500 per day per rail car.

That "would result in a de facto ban of crude-by-rail traffic from North Dakota to refineries throughout the Pacific Northwest," North Dakota's three members of Congress said in a letter sent Friday imploring Inslee to veto the bill that North Dakota officials worry could hamper the energy industry of the nation's No. 2 crude producer.

Inslee, who has made climate change a focus of his 2020 Democratic presidential campaign, indicated in a statement to The Associated Press on Tuesday that he's likely to sign the bill.

"It's pretty striking that the governor of the state of Washington is seeking to protect the people of North Dakota from oil spills, more than their members of Congress," he said.

North Dakota's Industrial Commission, which regulates the oil and gas industry, discussed its options on Tuesday. The group comprised of the governor, attorney general and agriculture commissioner intends to sue if Washington's bill becomes law because the commission believes it would violate interstate commerce law.

"The likelihood that this law if signed is unconstitutional is rather high," Attorney General Wayne Stenehjem said.

The volatility of oil trains drew widespread public attention following several explosive derailments, including one in 2013 in Lac-Megantic, Quebec that killed 47 people. Washington's bill is aimed at boosting safety for schools and homes that are near passing oil trains, according to Democratic Senate Majority Leader Andy Billig, the sponsor.

"These large shipments of extremely flammable fuel run through the heart of our state, starting with my community in Spokane," he said in March after the Washington Senate gave initial approval .

The bill sets a vapor pressure limit of less than 9 pounds per square inch for oil unloaded from trains, lower than North Dakota's limit of 13.7 psi and what is considered the national standard for stable crude of 14.7. North Dakota's limit, implemented in 2015 , builds in 1 psi as a margin of error.

About 150,000 barrels of North Dakota crude, or about one-tenth of the daily production in the state, is shipped to Washington refineries. Lowering that oil to a vapor pressure below 9 psi would require the removal of components such as butane, which is needed as an additive for winter gasoline blends so vehicles start in cold weather. That would devalue the product, said Kari Cutting, vice president of the North Dakota Petroleum Council, a trade group representing about 500 energy companies.

Council President Ron Ness said the Washington bill is "frankly scary" and the group "will be looking at all of our legal options."

The Washington bill would require new refineries to adhere to the new vapor pressure standard. Existing facilities would have to follow the rule beginning two years after increasing their oil volume by more than 10 percent from 2018. Cutting said some of the refineries had "major maintenance downtime" in 2018 and that they could trigger the requirement simply by resuming their normal volumes.

North Dakota Mineral Resources Director Lynn Helms said West Coast markets offer the best price for North Dakota crude, and as pipeline capacity in the state continues to shrink, "there is a lot of potential growth in the crude-by-rail industry."

The West Coast "is the prime growth market for North Dakota crude oil, and by capping it like this they're without question harming the state," he said.

North Dakota produces more oil than any other state but Texas, accounting for about 12 percent of U.S. production. The state saw record production in January of 1.4 million barrels daily.

If Bakken crude is cut off from the Pacific Northwest it ultimately will find other markets, though "there will be some time that it will be restrained," Cutting said. But she said the pressure on Washington to backtrack on the oil train rule is important because "it can't be allowed (for) one state to hamper commerce for other states." 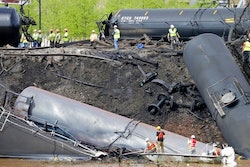 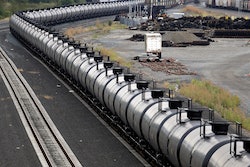 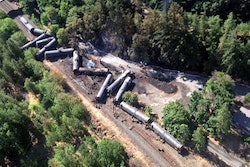