The U.S. Commerce Department is expected issue its guidance on whether auto imports endanger U.S. national security, leaving Trump to decide whether to impose taxes. 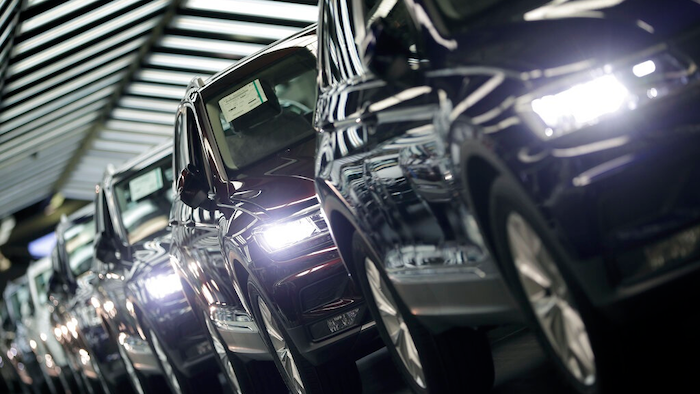 In this March 8, 2018 file photo photo Volkswagen cars are pictured during a final quality control at the Volkswagen plant in Wolfsburg, Germany. Germany's economic growth has stagnated in the last three months of the year.
AP Photo/Michael Sohn, file

BRUSSELS (AP) — The European Union warned U.S. President Donald Trump Monday that the bloc will step back from a commitment to buy more American soybeans and liquid gas if European cars are hit with punitive tariffs.

The U.S. Commerce Department is expected issue its guidance on whether auto imports endanger U.S. national security enough to justify import taxes, giving Trump 90 days to decide whether to impose them.

EU Commission President Jean-Claude Juncker said that during a summit in Washington last summer, Trump promised not to damage trans-Atlantic trade with such measures.

"Trump has given me his word that there will be no car tariffs for the time being," Juncker told the German newspaper Stuttgarter Zeitung.

"I believe him," Juncker said. "However, should he renege on that commitment, we will no longer feel bound by our commitments to buy more U.S. soya and liquid gas."

European Union spokesman Margaritis Schinas said that if the U.S. goes ahead with "actions detrimental to European exports, the European Commission would react in a swift and adequate manner."

The EU and the United States have been trying to work out a trade deal but progress has been slow.

Over the weekend, German Chancellor Angela Merkel said U.S. authorities appeared to have already concluded that European cars were a national security threat.

She noted that German automaker BMW's biggest plant is in South Carolina Merkel said if the cars produced there "are suddenly a threat to the United States' national security, that startles us."

Since the summer summit, when Juncker made a commitment to buy more U.S. soybeans, exports to Europe have soared largely because of market conditions. Last month, the EU also approved the use of U.S. soybeans for the production of biofuels, which would further boost imports.