There are few substitutes for the United States as an export market. 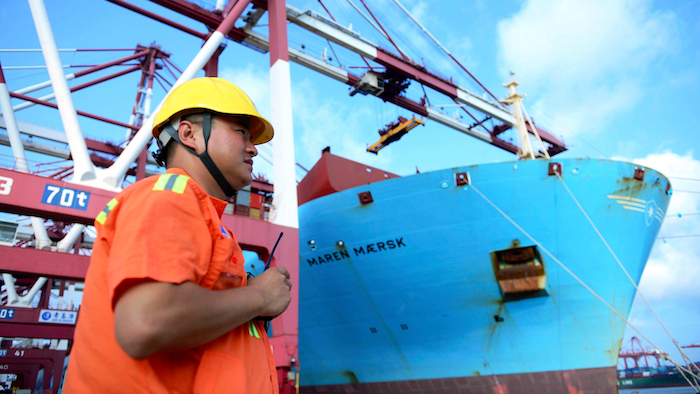 In this Aug. 8, 2018, photo, a worker stands near a container ship at a port in Qingdao in eastern China's Shandong Province. Beijing is responding to U.S. President Donald Trump’s tariff hikes by pressing companies to find more non-U.S. suppliers and customers. But there are few substitutes for the United States as a market and technology supplier.
Chinatopix via AP

BEIJING (AP) — Faced with plunging U.S. orders, surgical glove maker Ren Jiding is hunting for new markets amid Chinese government calls to reduce reliance on the United States. But none can absorb the 60 percent of his sales that went to American customers last year.

"Other countries import much less than the United States," said Ren, a co-owner of Hongyeshangqin Medical Science and Technology Co., Ltd. in the eastern city of Zibo.

From medical products to smartphone chips to soybeans, Beijing is responding to President Donald Trump's tariff hikes by pushing companies to trade more with other countries. But there are few substitutes for the United States as an export market and source of technology for industries including telecom equipment makers Chinese leaders are eager to develop.

Beijing has announced tariff cuts and other changes while rejecting U.S. demands to scale back plans such as "Made in China 2025," which calls for state-led creation of Chinese champions in robotics, biotech and other fields. American leaders say those violate Beijing's market-opening promises and might erode U.S. industrial leadership.

The response highlights the cost the ruling Communist Party is willing to pay in lost sales and jobs to stick to plans that are fueling conflict with Washington, Europe and other trading partners.

"China sees its technology and industrial policies as fundamental to its growth," Tianjie He of Oxford Economics said in an email. "It is thus hard to see China's leadership committing to significant changes."

Trump has raised duties on a total of $50 billion of Chinese imports including ultrasound scanners and industrial components that Washington says benefit from improper policies. China retaliated with similar penalties.

The U.S. is poised to raise duties on $200 billion of imports including the gloves made by Ren's company. Beijing has issued a list of American goods for retaliation.

The impact on China is "small and is containable, at least for the time being," said Vincent Chan of Credit Suisse. He said the "worst case" outlook if all threatened U.S. tariff hikes go ahead would cut China's growth by 0.2 percentage points this year and 1.3 percent in 2019.

Chinese leaders have tried to cushion the blow to their own economy by targeting American goods its importers can get from other countries — soybeans from Brazil, gas from Russia, cars from Germany and fish from Vietnam.

Beijing has promised to use revenue from the higher tariffs to help struggling exporters and has ordered banks to lend more freely to them.

The biggest jolt so far came from Beijing's cancellation of orders for soybeans, the biggest American export to China at $21 billion last year. That hammered farm states that voted for Trump in the 2016 election. It also pushed up prices for Chinese farmers that use soybeans for animal feed and food processors that crush them for cooking oil.

That could be a windfall for Brazil. But China already is its top market and consumes two-thirds of the global supply. Chinese total imports last year of 95 million metric tons were 50 percent more than the South American giant's entire exports.

"The Chinese can talk all they want about finding other sources of soybeans," but 80 percent come from the United States, Brazil and Argentina, said Michael Cordonnier, president of Soybean & Corn Advisor, Inc., a U.S. research firm.

"If you want to import soybeans, it generally must be from one of those three countries," said Cordonnier in an email.

Regulators also cut import duties on automobiles on July 1 but raised them on vehicles from the United States. That helps luxury brands that import from Germany and Japan.

Replacing markets for Chinese exporters that support tens of millions of jobs will be harder.

Americans bought 40 percent of his canvas tote bags last year, including the most profitable customized versions with Christmas and other designs.

"What we export to Europe is lower-end products with lower prices," said Hu. "We could explore the Indian, Vietnamese or Philippine markets. But the prices they offer would be too low."

Chinese officials point to potential markets in the "Belt and Road," a multibillion-dollar initiative led by President Xi Jinping to boost trade by building ports, railways and other infrastructure across Asia to Europe.

That has brought a flood of contracts to Chinese state-owned builders but complaints about costs have hurt its appeal. Prime Minister Mahathir Mohamad of Malaysia announced this month the cancellation of plans for Chinese-built projects including a $20 billion rail line.

"There is potential for development in areas such as central Asia, Eastern Europe, Africa and South America. But their problems are development imbalance and economic instability," said Li Yong, a senior fellow at the China Association of International Trade, an industry group.

Local officials have met with exporters to exhort them to "diversify markets," according to the state press.

Authorities in the central city of Jingzhou visited exporters to help with customs forms, financing and other details, the website China Industry and Commerce News said.

Ren, the surgical glove maker, said his 300-employee company was looking at Europe and developing countries but demand was sluggish.

Some companies are confident of keeping their U.S. market share. That reflects the possible success of official efforts to develop higher-tech goods instead of competing on price alone.

The general manager of Yihua Electronic Equipment Co. in southern China's Guangdong said the tariffs should not affect sales of its digital soldering guns, one fifth of which are sold to the United States.

"With the 25 percent tariffs, ours still are cheaper than similar German- or Japanese-made products," said the manager, who would give only his surname, Gou. "We are not producing something like shoes and clothing that could be easily replaced."

Trump's pressure is likely to backfire by encouraging Beijing to throw even more resources at nurturing its own technology creators.

China's search for non-U.S. suppliers could help companies such as Taiwanese chipmaker MediaTek Inc. But redesigning a phone or network gear and then gaining regulatory and customer approval can take a minimum of three to five years.

"For now," said He of Oxford Economics, "China remains technologically dependent on the U.S."