Foreign Minister Wang said Beijing recognizes that the U.S. is trying to put pressure on China, "but we don't think such an approach will work." 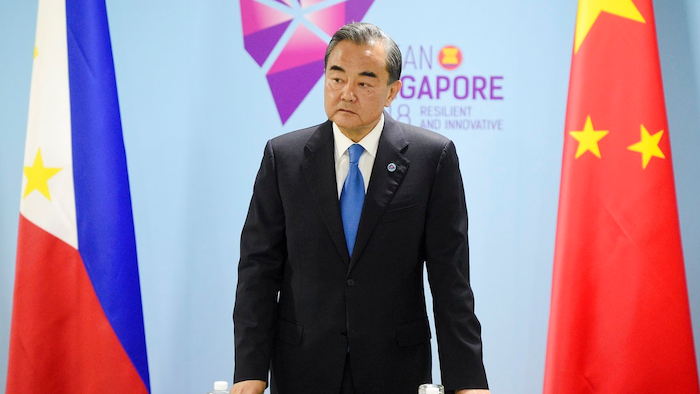 BEIJING (AP) — China's foreign minister said Thursday that U.S. threats to hike tariffs run against the trend toward globalization and will hurt U.S. businesses and consumers.

"Well, I should point out that nowadays we live in a globalized world," Want said while attending a regional meeting in Singapore. "We're not doing 19th century trade," he said.

"Goods flow from one country to another along the globalized industrial value chains," he said. "So is the United States trying to put tariffs on its own companies?"

China and the U.S. have raised tariffs on billions of dollars of each other's goods over complaints Beijing steals or pressures foreign companies to hand over technology.

Wang's comments came after the U.S. Trade Representative announced Wednesday it was considering raising import duties on $200 billion of Chinese goods by 25 percent instead of the previously planned 10 percent.

That reflected American frustration that Beijing retaliated by raising its own duties on U.S. imports in response to tariff hikes on Chinese goods over complaints the communist government steals or pressures companies to hand over technology

Wang said Beijing recognizes that the U.S. side was trying to put pressure on China.

"But we don't think such an approach will work," he said. "We hope that the trade policy makers in the United States will be cool-headed and listen to the voice of U.S. consumers and pay high attention to the voice of the American business community ..." he said, noting that higher tariffs will add to costs for U.S. companies operating in China and for consumers.

In Beijing, a foreign ministry spokesman, Geng Shuang, said Beijing was open to dialogue but gave no indication about the status of possible negotiations.

"Our door for dialogue is always open. But dialogue must be based on mutual respect, equality, rules and credibility," said Geng. "Now, the US coerces and pressures others unilaterally. It will only be counterproductive."