The company drew criticism for benefiting from the family's White House ties. 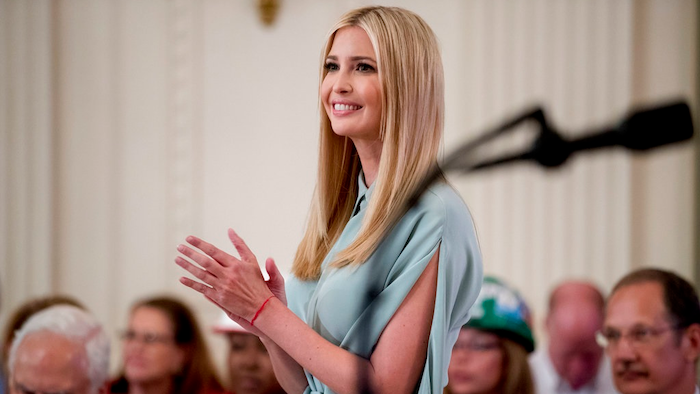 In a Thursday, July 19, 2018 file photo, Ivanka Trump, the daughter of President Donald Trump, applauds during a signing ceremony where President Donald Trump signed an Executive Order that establishes a National Council for the American Worker in the East Room of the White House, in Washington. Ivanka Trump’s clothing company is shutting down and all its employees are being laid off, according to news reports. The New York Post is reporting that its sources say the company “will be shuttered ‘ASAP’ and that staff have been informed that they’re being laid off.”
AP Photo/Andrew Harnik, File

NEW YORK (AP) — Ivanka Trump is shutting down her clothing company and laying off 18 employees after some stores dropped her line and she decided ethics restrictions were holding back its ability to grow.

The president's daughter said in statement she made the decision to focus more on work as a White House adviser.

"After 17 months in Washington, I do not know when or if I will ever return to the business, but I do know that my focus for the foreseeable future will be the work I am doing here in Washington," she said, "so making this decision now is the only fair outcome for my team and partners."

Ivanka Trump has recently been encouraging U.S. companies to pledge to hire American workers. Her company has been criticized for using Chinese workers abroad to make its products.

Opinions about the brand have become highly polarized and it has faced boycotts from anti-Trump protesters. With sales flagging by some measures, Nordstrom dropped the Ivanka Trump line last year and recently Hudson Bay reportedly did the same.

The company has also come under criticism from ethics experts for trademarks granted by foreign governments such as China that would want to curry favor with the president.

Analyst Neil Saunders, managing director of GlobalData Retail, said that "while the company is still viable, doing business has become far more challenging and these problems will only increase."

The bulk of Ivanka Trump's assets —more than $50 million worth — was contained in a trust that holds her business and corporations. That trust generated over $5 million in revenue last year, according to a financial disclosure report filed with the government.

When Ivanka Trump joined the White House as adviser to her father, she stepped aside from running her company and agreed to several restrictions so that her financial interest in the business would not conflict with her public role as a White House adviser.

Still, the company drew criticism for benefiting from their White House ties.

In April last year, the Chinese government granted her company provisional approval for three new trademarks, the same day she and her husband Jared Kushner dined with the president of China and his wife at President Trump's Mar-a-Lago resort.

Ivanka Trump's brand has said the 2017 Chinese trademarks were filed defensively to protect against squatters using her name. China has said its trademarks policy regarding Ivanka Trump's company is in line with normal legal practice.

The Ivanka Trump brand has also come under criticism for conditions at factories where its products were made in China. The Associated Press spoke with workers last year at an Ivanka Trump shoe factory in Ganzhou, China, who described long hours, low pay and abuse.

The company said at the time that the "integrity" of its supply chain was a "top priority" and that it takes such allegations "very seriously."