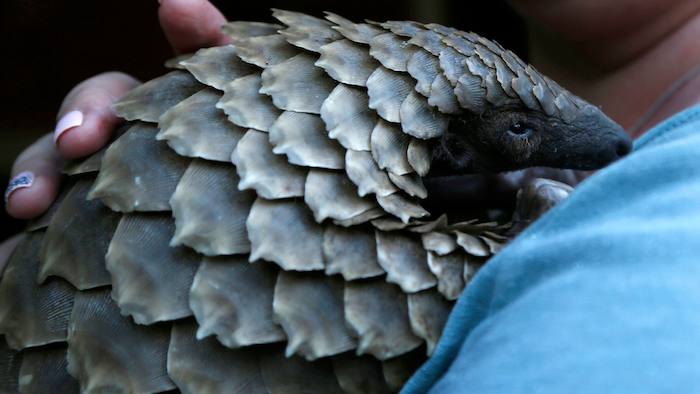 In this file photo taken on Friday March 16, 2018 a pangolin from the Johannesburg Wildlife Veterinary Hospital is taken to a nearby field to forage for food near Johannesburg. Nearly 100 countries took part in a globe-spanning crackdown on the illegal wildlife trade, seizing tons of meat, ivory, pangolin scales and timber in a monthlong bust that exposed the international reach of traffickers, Interpol said Wednesday, June 20, 2018.
AP Photo/Denis Farrell, File

PARIS (AP) — Thousands of live animals along with tons of meat, ivory, pangolin scales and timber were seized in a monthlong global crackdown on the illegal wildlife trade that Interpol said exposed the international reach of traffickers (view photos in gallery).

The live animals recovered in the stings included turtles in Malaysia and parrots in Mexico. Canada intercepted 18 tons of eel meat arriving from Asia. Those arrested included two flight attendants in Los Angeles and a man in Israel whose house was raided after he posted a hunting photograph on social media.

Acknowledging the magnitude of the problem, Jordan said global wildlife crime is worth about $150 billion annually and is fourth in value among illegal global trades behind drugs, counterfeiting and human trafficking.

The Thunderstorm swoop included the confiscation of 8 tons of pangolin scales, half of which was found by Vietnamese authorities on a ship from Africa.

Africa's four species of pangolins are under increasing pressure from poachers because of the decimation of the four species in Asia, where pangolin scales are used in traditional medicine.

China, the world's largest ivory consumer, banned its domestic trade starting this year in what conservationists hope will relieve pressure on Africa's besieged elephant populations. While some herds are recovering, a high rate of killing continues in many areas, such as Mozambique's Niassa reserve.

Participating nations were from Asia, Europe, the Middle East and North and South America. The Pacific nation of Vanuatu, which is not an Interpol member, took part.