ZTE Crippled, U.S. Imports Held Up in China Due to Spat

American products are facing stepped-up inspections, suggesting Beijing may be making life tougher for U.S. companies as the dispute drags on. 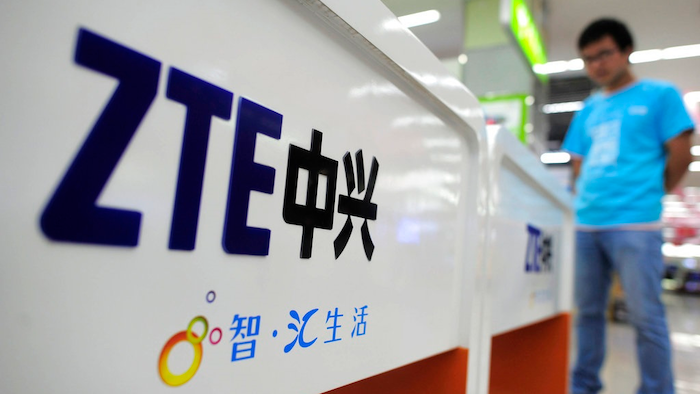 In this Oct. 8, 2012, file photo, a salesperson stands at counters selling mobile phones produced by ZTE Corp. at an appliance store in Wuhan in central China's Hubei province. The tech company, ZTE, a Chinese tech giant brought to its knees and delayed shipments of imported U.S. cars, apples, lumber and other agricultural products are the early casualties as China and the U.S. exchange salvos in a trade dispute.
Chinatopix Via AP, File

HONG KONG (AP) — A Chinese tech giant brought to its knees and delays for imported U.S. cars, apples, lumber and other agricultural products are early signs the widening trade dispute between China and the U.S. is exacting a toll on both sides.

More talks aimed at resolving the conflict are planned for next week in Washington, while both sides dig in for a fight over their trade imbalance.

The tech company, telecommunications equipment and smartphone maker ZTE, said Wednesday that it's ceasing "major operations" after the U.S. last month banned it from doing business with American suppliers for seven years as a punishment for illegal exports.

Also this week, businesses and officials reported that American products are running into delays in customs clearance because of stepped-up inspections at Chinese ports, suggesting Beijing may be making life tougher for U.S. companies as the dispute drags on.

ZTE's crippling business ban stems from a case dating to before the Trump administration, but analysts say the outcome was worse than expected, reflecting a deterioration in trade relations as the two countries vie for technological dominance.

"It has become really political now," said Nikhil Batra, a telecom analyst at IDC. "There would be wider consequences than for just the telecom industry" and for the companies directly involved, he added.

The U.S. Commerce Department's ban cut off ZTE's access to vital technology and components like semiconductors from U.S. suppliers.

ZTE said in a statement that is has enough cash and will seek to fulfill its contracts. It was unclear if the company is planning to shut down: last week during trade talks in Beijing Chinese officials appealed to their U.S. counterparts to end the ban.

But in another sign of fallout from the sanctions, Australian telecom company Telstra said Thursday it will stop selling the company's mobile phones and broadband devices because the U.S. ban prevents ZTE from making them.

"This was a difficult but necessary step," Telstra's head of innovation and strategy, Michele Garra, wrote in a blog post .

ZTE sells smartphones globally and supplies networks or equipment to some of the world's biggest telecoms companies. Losing access to U.S. suppliers is a heavy blow for it and the companies it buys from. The company is the No. 4 smartphone vendor in the U.S., where it also sources more than 40 percent of its components, according to IDC data, a multibillion-dollar revenue stream for suppliers like Qualcomm and Intel. Finding alternate suppliers won't be easy, "therefore, this U.S. ban would be a fatal crisis for any company," said Yan Sufei, analyst at Zero Power Intelligence Group. "We can't rule out that there will be layoffs later on."

At the same time, U.S. companies exporting to China are seeing their goods held up at China's ports.

Customs officials were stepping up checks on Ford vehicles for stricter inspections of their emissions systems, ostensibly to comply with new regulations.

"That check is apparently quite onerous," said a person briefed on the matter who spoke on condition of anonymity. "It involves disassembling the vehicles and evaluating each of the components of the emissions system. Once a vehicle is taken apart it can't be sold so it forces long delays and high storage fees for those vehicles in China."

Last year Ford imported 18,819 autos, including Lincoln-brand vehicles, which arrived at ports in Shanghai and Tianjin. The company said in a statement, "We are closely monitoring our situation at the port."

The U.S. Department of Agriculture said it has received reports of "increased inspections" of many products, without being more specific. The department said in a statement that it is "troubled by reports that China continues to impose unjustified restrictions on U.S. products."

Chinese customs officials said on Monday they were tightening up quarantine inspections of apples and lumber imported from the U.S. for signs of rot, pests or diseases.

Inspectors in Shanghai, Shenzhen, Qingdao and Xiamen would send samples for lab testing and shipments would not be able to pass through customs while the tests are carried out and any contaminated shipments will be returned or destroyed, according to the notice posted on China's General Administration of Customs website.

China's Foreign Ministry said it had no information on the inspections and spokesman Geng Shuang said at a regular briefing that the country "always follows law-based, scientific and fair principles when carrying out quarantine and inspection on imported products."