Airplanes, Oil at Risk in Trump Pullout of Iran Deal

The threat alone has been enough to scare risk-averse firms, like Boeing Co., into slow-walking deals. A complete pullout by the U.S. would wreak further havoc. 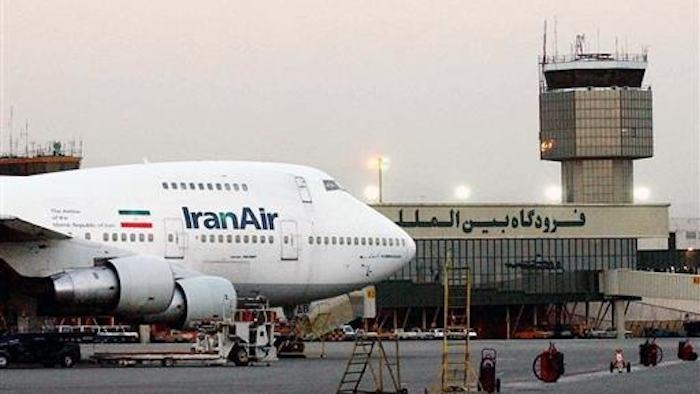 DUBAI, United Arab Emirates (AP) — From airplanes to oilfields, billions of dollars are on the line for international corporations as President Donald Trump weighs whether to pull America out of Iran's nuclear deal with world powers.

Regardless of where they are headquartered, virtually all multinational corporations do business or banking in the U.S., meaning any return to pre-deal sanctions could torpedo deals made after the 2015 agreement came into force.

That threat alone has been enough to scare risk-averse firms, like Boeing Co., into slow-walking deals agreed to months ago. A complete pullout by the U.S. would wreak further havoc and likely frighten off those considering making the plunge.

"I absolutely think those on the fence will not jump in," said Richard Nephew, a former sanctions expert at the U.S. State Department who worked on the nuclear deal and now is at New York's Columbia University. "The only ones who will, will be those who see tremendous monetary benefit and no U.S. risk."

The 2015 Iran nuclear deal lifted crippling economic sanctions that had locked Iran out of international banking and the global oil trade. In return, Tehran limited its enrichment of uranium, reconfigured a heavy-water reactor so it couldn't produce plutonium and reduced its uranium stockpile and supply of centrifuges.

But Boeing has yet to deliver a single aircraft to Iran. The Chicago-based company's CEO recently stressed it understands the "risks and implications around the Iranian aircraft deal," which would be the biggest business agreement between an American company and Iran since the 1979 Islamic Revolution and U.S. Embassy takeover.

"We continue to follow the U.S. government's lead here and everything is being done per that process," Dennis Muilenburg said during a quarterly earnings conference call on April 25. "We have no Iranian deliveries that are scheduled or part of the skyline this year, so those have been deferred again in line with the U.S. government process."

Airbus, a European airline consortium based in Toulouse, France, likewise continues its sales at the discretion of the American government. At least 10 percent of its aircraft components are of American origin, meaning it requires permission from the U.S. Treasury for its sales to Iran. Airbus has already delivered two A330-200s and one A321 to Iran.

Airbus declined to comment when asked by The Associated Press about its possible plans ahead of Trump's decision.

European airplane manufacturer ATR struck a $536-million deal with IranAir for at least 20 aircraft last year. It's already has delivered eight of its twin-engine turboprops to Tehran after earlier winning permission from the U.S. Treasury.

"To date, we are on track to deliver the remaining ATR aircraft in due time, before the end of the year," ATR spokesman David Vargas told the AP.

The speed at which Western airplane manufacturers went into Iran is contrasted by a slow start by Western energy firms despite the country's vast oil and gas wealth. The exception is French oil giant Total SA, which in July signed a $5 billion, 20-year agreement with Iran and a Chinese oil company to develop the country's massive South Pars offshore natural gas field. The natural gas pumped by the deal will go toward Iran's domestic market.

The deal marked a return to Iran for Total, which pulled out of the country in 2008 as Western sanctions over its nuclear program began to ramp up. Total did not respond to requests for comment, though its CEO Patrick Pouyanne reportedly told Trump in February to stick with the deal.

"If the framework, the rules of the game, change, of course we will have to re-evaluate," Pouyanne told the Financial Times.

French carmaker PSA Peugeot Citroen reached a deal in 2016 to open a plant producing 200,000 vehicles annually in Iran. Peugeot, once a major player in Iran's car market before sanctions, did not respond to a request for comment.

Meanwhile, fellow French automobile manufacturer Groupe Renault signed a $778-million deal to build 150,000 cars a year at a factory outside of Tehran.

"The Renault Group is closely monitoring the evolution of the diplomatic situation," the company said in a statement to the AP, without elaborating.

"Currently we are tracking and examining the development of the political and economic environment in the region very closely," the German carmaker said in a statement. "In principle, Volkswagen adheres to all applicable national and international laws and export regulations."

Nuclear deal co-signers Britain, France and Germany, which have urged Trump to preserve the deal, may seek exemptions to protect their companies if the U.S. snaps back sanctions, said Ellie Geranmayeh, a senior policy fellow studying Iran at the European Council on Foreign Relations.

"This should include a series of exemptions and carve-outs for European companies already involved in strategic areas of trade and investment with Iran, with the priority being to limit the immediate shock to Iranian oil exports," she wrote Wednesday.