The Chinese company embroiled in scandal said it was working on a solution. 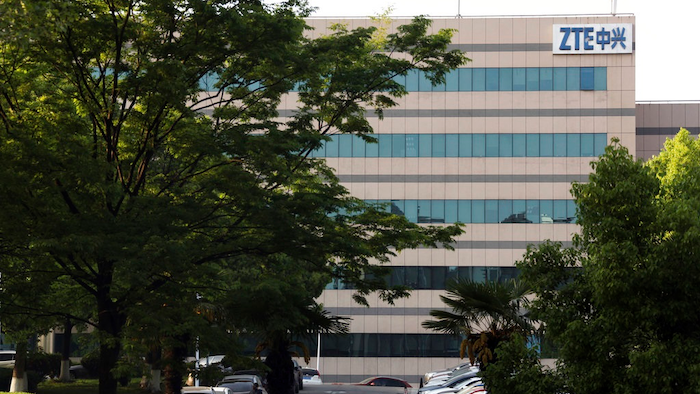 In this April 17, 2018, photo, a woman walks through the parking lot of a building hosting ZTE subsidiaries in Nanjing in eastern China's Jiangsu province. Chinese tech company ZTE said Friday, April 20, 2018, that it won't accept an "unfair" U.S. penalty in a case involving exports of telecoms equipment to North Korea and Iran and is seeking a solution through legal channels.
Chinatopix via AP

BEIJING (AP) — ZTE Corp., one of China's biggest tech companies, warned Friday a ban on access to U.S. technology threatens its survival and said the company is looking for a legal solution.

State-owned ZTE "may enter a state of shock," which will hurt its employees and U.S. suppliers, its chairman said, according to Chinese news reports. A separate company statement said the ban "threatens ZTE's existence."

The ban was imposed Monday in a case involving exports of telecoms equipment to Iran and North Korea. U.S. companies are barred from selling technology to ZTE for seven years.

The penalty comes as tension mounts between Beijing and U.S. President Donald Trump over technology policy, though the case dates to before Trump took office in January 2017.

On Friday, a Chinese foreign ministry spokeswoman criticized U.S. restrictions on trade and investment in technology as attempts to shield itself from competition.

The sanctions could handicap ZTE's global business selling smartphones that use Google Inc.'s Android system and network gear for phone and internet companies that incorporates U.S. chips and other technology.

The sales ban also could disrupt a multibillion-dollar revenue flow to U.S. companies such as Qualcomm Inc. that supply chips, software and other technology.

ZTE pleaded guilty in March 2017 and agreed to pay a $1.19 billion penalty for having shipped equipment to Iran and North Korea in violation of U.S. regulations. The company promised to discipline employees involved in the scheme, but the U.S. Commerce Department said this week they were paid bonuses instead.

Speaking at ZTE headquarters in the southern city of Shenzhen, chairman Yan Yimin complained U.S. authorities had imposed "the most severe action" without waiting for an investigation and corrective measures to be completed, according to news reports. Yan criticized that as "extremely unfair."

"The U.S. ban may cause ZTE to enter a state of shock and directly harm the company's employees, operators around the world, customers, end-users and shareholders. We firmly oppose this," said Yan, according to outlets including China Business News and the Economic Times.

The company statement said ZTE is "determined to safeguard its legitimate rights and interests through all legally permitted means," but gave no indication what steps it might take.

Yan said ZTE designs many of its own chips but also needs technology from outside suppliers.

ZTE is, along with telecoms rival Huawei Technology Ltd. and computer maker Lenovo Group, among the first Chinese companies to compete in global technology markets. It has 65,000 employees and operates in 160 countries.

Trump has threatened to impose an additional 25 percent tariff on up to $150 billion of Chinese goods including telecoms equipment in response to complaints that Beijing improperly pressures foreign companies to hand over technology. China has issued a $50 billion list of U.S. goods for possible retaliation.

ZTE and Huawei have been shut out of the U.S. market for network switching gear since a congressional panel in 2012 labeled them security threats.

Despite that, ZTE has built up smartphone sales in the United States, which is now its biggest market, a status that could be in jeopardy.

The company can keep using Android, for which Google charges no fee, but might lose access to applications such as Google Maps, Gmail and Youtube, according to according to IDC analyst Kiranjeet Kaur.

"If ZTE cannot have these Google applications, ZTE phones will be a lot less attractive," Kaur said in an email.

Kaur said its smartphones also have a "high dependence" on Qualcomm application processors.

"On the one hand, the United States urges China to open its market wider. On the other hand, it keeps rolling out restrictions on China's business activities," said Hua. "This does not conform to market disciplines or international rules, nor is it consistent with the principles of equality, fairness and reciprocity that the United States has been calling for."