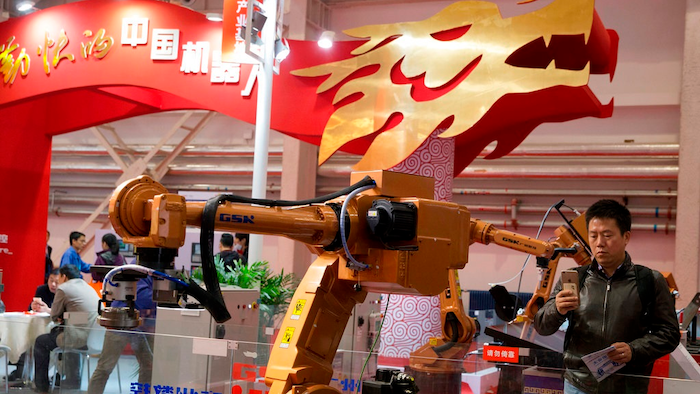 In this Oct. 21, 2016 file photo, visitors look at industrial robots displayed beneath the words that read "Chinese Robots" during the World Robot Conference in Beijing. U.S. officials have a name for their frustration with Beijing’s technology ambitions: ‘Made in China 2025.’ President Donald Trump’s government says China’s plan to create global competitors in fields from information technology to electric cars to pharmaceuticals is an example of policies that prompted Trump’s threat to hike tariffs on $50 billion of Chinese goods. They say China’s tactics include improperly subsidizing local and pressuring foreign competitors to hand over technology.
AP Photo/Ng Han Guan, File

BEIJING (AP) — U.S. officials have a name for their frustration with Beijing's technology ambitions: "Made in China 2025."

Issued in 2015, it calls for China to develop its own global competitors in fields from information technology to electric cars to pharmaceuticals. The U.S. Trade Representative's Office cited "Made in China 2025" in announcing last week a $50 billion list of Chinese goods targeted for President Donald Trump's tariff hike.

Many countries have similar plans. But American officials contend China's tactics include subsidizing local companies, shielding them from competition and pressuring foreign companies to hand over technology.

"Made in China 2025" isn't the first time Beijing's technology and industry plans have rankled trading partners who say they violate promises to open markets and treat foreign and Chinese companies equally. Below are some details on the issue:

WHAT DO CHINESE LEADERS WANT?:

Communist leaders want to transform China from a low-cost factory into a creator of profitable technologies in areas including electric cars, solar and wind power, robotics and information technology.

China assembles 90 percent of the world's mobile phones and 80 percent of its computers. But it relies on technology and components from the United States, Europe and Japan, which get most of the profit. Its leaders want China to capture more of that, securing better-paid jobs and restoring China's historic status as a leading culture.

"Made in China 2025" is the first stage in a plan to make China a global manufacturing power by 2049, the centenary of the communist revolution.

Targets include making 70 percent of components and materials domestically and establishing 40 "innovation centers" by 2025.

The Chinese government has promised the equivalent of hundreds of billions of dollars in support.

A decade ago, foreign companies complained Beijing was trying to squeeze them out of promising fields. They say "Made in China 2025" is especially alarming because it declares that new industries will be controlled by wholly Chinese-owned champions.

A deputy Chinese commerce minister tried to defuse such criticism by telling reporters last week "Made in China 2025" is open to foreign companies.

WHICH INDUSTRIES DOES IT TARGET?:

And that is just the manufacturing strategy. Previous official science and technology plans over the past two decades have targeted areas including nuclear power, genetics, deep sea equipment, satellites and lasers.

HOW ARE THEY DOING IT?:

Business groups and foreign governments say "Made in China 2025" relies heavily on subsidies and market barriers that hamper competition.

The plan draws heavily from Germany's "Industry 4.0" strategy. But the German plan is based on market forces and allows a role for foreign companies, while Beijing's goal is to create Chinese champions.

Other official tools include government procurement rules that favor Chinese-made technology in possible violation of Beijing's WTO pledges, and subsidies and acquisition of technology from abroad.

WHO OBJECTS AND WHY?:

In a report last year, the European Union Chamber of Commerce in China warned the plan also could backfire if companies that make lackluster products but are supported by subsidies drive genuinely innovative rivals out of the market.

The chamber said the vast sums of government money being plowed into development could result in a glut of surplus production similar to that in China's steel and solar panel industries.

The Next Revolution: 'Made in America'

Are Your Clothes Made in N. Korea?

Naval Strike Missiles to Be Made in the U.S.