Overall, the nation's farmers shipped nearly $20 billion of goods to China in 2017. 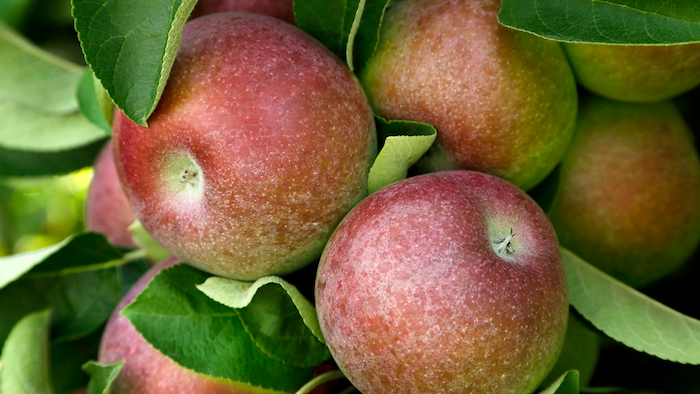 In this Aug. 30, 2015, file photo, McIntosh apples hang on a tree at Carlson Orchards in Harvard, Mass. After President Donald Trump announced plans to impose tariffs on products the Chinese government responded Friday, March 23, 2018, with a threat to add an equal 25 percent charge on U.S. products including pork. A 15 percent tariff also would be imposed on wine, apples, ethanol and stainless steel pipe as part of a $3 billion list of U.S. goods for possible retaliation.
AP Photo/Steven Senne, File

DES MOINES, Iowa (AP) — From hog producers in Iowa to apple growers in Washington state and winemakers in California, farmers expressed deep disappointment Friday over being put in the middle of a potential trade war with China by the president many of them helped elect.

After President Donald Trump announced plans to impose tariffs on products including Chinese steel, Beijing responded Friday with a threat to slap an equal 25 percent charge on U.S. products such as pork, and a 15 percent tariff on such things as wine, apples, ethanol and stainless-steel pipe.

American farmers "should be not necessarily infuriated but close to it," said Wayne Humphreys, who farms corn and soybeans and raises hogs and cattle near Columbus Junction, Iowa. "We've invested a lot of time, talent and treasure in developing markets around the world, and with the stroke of a pen, that investment has been jeopardized."

Overall, the nation's farmers shipped nearly $20 billion of goods to China in 2017. The American pork industry sent $1.1 billion in products, making China the No. 3 market for U.S. pork.

"No one wins in these tit-for-tat trade disputes, least of all the farmers and the consumers," said National Pork Producers Council President Jim Heimerl, a pig farmer from Johnstown, Ohio.

The U.S. has complained for years about China's sharp-elbowed trading practices, accusing it of pirating trade secrets, manipulating its currency, forcing foreign companies to hand over technology, and flooding world markets with cheap steel and aluminum that drive down prices and put U.S. manufacturers out of business.

On Thursday, the Trump administration declared the talk approach a failure, noting that the U.S. trade deficit in goods with China last year hit a record $375 billion. In a move to punish Beijing for stealing American technology, the White House set in motion tariffs on up to $60 billion in Chinese imports and restrictions on new Chinese investment in the U.S.

"We're doing something that will be the start of making trade with China more fair," Trump said. "Our past presidents should never have allowed this to happen."

The stakes are high: China is America's largest trading partner. Last year, the two countries exchanged $636 billion worth of goods, and American companies such as Boeing and Caterpillar depend heavily on the Chinese market.

Farmers voted overwhelmingly for Trump in 2016. But now many worry about economic blowback from his combative approach.

"When you start hurting this big segment of the economy from the people that gave him a lot of support in the election, I think it's going to hurt him. I really do," said Dave Struthers, who raises pigs, corn, soybeans and hay on a 1,100-acre family farm 30 miles northeast of Des Moines.

He said hog farmers are already struggling to make a profit, with prices below the break-even point, "and any more pressure against that is just going to hurt us that much more."

"We're very concerned about what might happen as far as a tariff," he said.

Some are holding out hope a trade war can be averted and the disputes can be resolved through negotiation.

"I think it's important to realize that China has said this, but it hasn't been implemented," said David Preisler, CEO of the Minnesota Pork Producers Association. "Hopefully there's still time to sit down and have respective governments work through things."

U.S. apple growers just got their foot in the door in China in 2015, and the country is now their 10th-largest market, with demand growing. They expressed frustration that their efforts could be damaged with tariffs.

"We are competing, and winning, with our exports to China growing nicely from zero to about 2.5 million boxes per year," said Jim Bair, CEO of the U.S. Apple Association, a trade group. He warned that U.S. apple growers are going to "get hurt in a fight we didn't start and in which we have no interest."

At a time when U.S. wine exports have been slipping overall, there's been growth in exports to China, where a rapidly growing middle class is adopting many Western tastes.

Exports to China, Hong Kong and Taiwan grew 10 percent to $197 million in 2017, the San Francisco-based Wine Institute said. The value of U.S. wine exports to China alone increased 450 percent in the past decade, the industry group said.

"Chinese retaliation against U.S. wine would put our producers at a significant disadvantage in one of the most important markets in the world at a critical time," said Bobby Koch, CEO of the Wine Institute. He said the industry could end up losing market share for years to come.

About 97 percent of U.S. wine exports come from California.