China Shrinks Steel Industry, But Not Fast Enough for West

Beijing has closed mills and eliminated 1 million jobs but is moving too gradually to defuse American and European anger at a flood of low-cost exports. 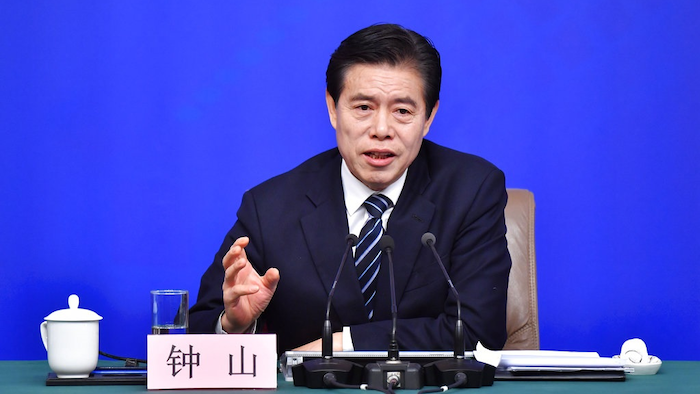 In this photo released by China's Xinhua News Agency, Chinese Minister of Commerce Zhong Shan speaks at a press conference in Beijing, Sunday, March 11, 2018. China says it will not initiate a "disastrous" trade war with the United States, but is vowing to defend its national interests in the face of growing American protectionism.
Li Xin/Xinhua via AP

BEIJING (AP) — China's steel mills, a target of U.S. President Donald Trump's ire, are their industry's 800-pound gorilla: They supply half of world output, so every move they make has a global impact.

The steel industry swelled over the past decade to support a history-making Chinese construction boom. Once that tailed off, the country was left with a glut of half-idle, money-losing mills.

Beijing has closed mills and eliminated 1 million jobs but is moving too gradually to defuse American and European anger at a flood of low-cost exports that is double the volume of second-place Japan.

Chinese authorities say they shut down 30 million tons of steel production capacity last year. That cut alone is equal in size to the annual output of the No. 9 producer, Brazil, but only a sliver of China's 800 million tons.

Beijing's goal is to make its industry more efficient and profitable, not just smaller. So while some mills close, bigger rivals step up production and could become even more formidable global competitors.

Total steel production rose 5.7 percent last year over 2016 to a record 831 million tons, according to the Chinese Cabinet's planning agency, the National Reform and Development Commission. That was on top of a 1.2 percent increase in 2016 and more than seven times Japan's output.

The industry is forecasting another 1 percent rise this year.

"Without the capacity cutting, there would have been much more production than there is now," said Wang Suzhen, an analyst for Mysteel, a news service that follows the Chinese industry.

Steel and heavy industry have long been a political touchstone for Chinese leaders, which led to economic disaster in the 1950s.

In 1958, then-leader Mao Zedong encouraged the public to produce steel in backyard furnaces for his Great Leap Forward, a short-lived attempt at overnight industrialization.

Villagers stripped hillsides for fuel and burned doors and furniture to melt pots and pans and whatever other metal they could find to produce useless pig iron. The diversion of resources into the Great Leap led to famine that killed tens of millions of people.

In the past two decades, production took off as Chinese cities were bulldozed and rebuilt with thousands of new office and apartment towers, shopping malls, bridges and expressways. Output rose from under 130 million tons in 2000 to more than 600 million in 2010.

Steel and aluminum, along with coal, glass and solar panels, are among many Chinese industries that mushroomed until supply vastly outstripped demand.

Once the building boom cooled, suppliers left with vast stockpiles of unsold goods resorted to price-cutting wars that threatened many with bankruptcy.

Beijing has announced plans to shrink steel and coal but has yet to outline plans for others.

China's aluminum output is a fraction of steel's size at about 36 million tons last year. But foreign competitors say the impact of low-cost Chinese exports on their industry has been even more devastating.

Last year's exports fell 30 percent from 2016 to 63 million tons, but that still was one-quarter of the global total and more than twice Japan's 30 million tons.

Beijing tried to defuse threats of trade sanctions by agreeing at a meeting of the Group of 20 major economies in 2016 to form a global panel to discuss how to shrink the industry. But it avoided any binding commitments.

In the U.S. market, sales of Chinese steel have plunged due to earlier tariffs of up to 522 percent imposed on some products to offset what Washington says are improper subsidies to producers.

That means that while Trump has singled out China for criticism, his latest tariff hike is likely to hit U.S. allies Japan and South Korea harder.

The United States bought just 1.1 percent of China's steel exports last year compared with 12 percent for South Korea and 5 percent for Japan, according to the U.S. International Trade Commission.

At the same time, Beijing is merging its biggest steelmakers into even bigger, more efficient competitors.