Officials from both countries expressed frustration with current American skepticism about free trade. 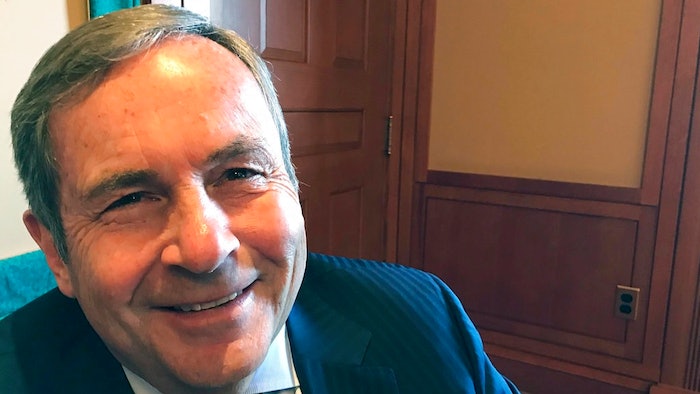 Canadian Ambassador to the US David MacNaughton chats about NAFTA negotiations after panel discussion at Arizona State University in Tempe, Ariz. on Wednesday, Feb. 21, 2108. MacNaughton told a gathering of business and academic leaders that better communication is needed to turn around U.S. fears so the countries can successfully rework the North American Free Trade Agreement hammered out a quarter century ago.
AP Photo/Anita Snow

TEMPE, Ariz. (AP) — Senior Canadian and Mexican officials on Wednesday expressed frustration with current American skepticism about free trade, saying the benefits for all three countries should be kept in mind during the current renegotiation of NAFTA.

Canadian Ambassador to the U.S. David MacNaughton told a gathering of business and academic leaders at Arizona State University that better messaging is needed to turn around U.S. fears so the countries can successfully rework the North American Free Trade Agreement hammered out a quarter century ago. He said all three countries must recognize that they stand to gain by lowering tariffs and other barriers to international commerce.

"There is no one in the world who wants the U.S. to be successful more than Canada, because your prosperity is our prosperity" MacNaughton said. "We all need to roll up our sleeves and work hard at this."

"It makes it difficult if the attitude is, 'We haven't got a fair deal and therefore all the changes have to be concessions by the other parties," MacNaughton said in a brief interview after the panel, referring to the U.S. government stance on NAFTA. "We need to better communicate the benefits of trade."

Ambassador Mario Chacon, of the Mexican government's ProMexico trust that promotes trade and foreign investment, told the group that much of the American job loss that U.S. politicians blame on free trade is the result of technology. "We are losing jobs to robots, to machines," said Chacon, adding that countries need to better train workers for new jobs in evolving economies.

Chacon said he was optimistic NAFTA would be successfully renegotiated no matter who wins Mexico's presidential election this summer. Just as President Donald Trump has questioned whether NAFTA is beneficial to the United States, the leftist front-runner for Mexico's presidency Andres Manuel Lopez Obrador has criticized free trade deals that he says don't put the Mexican people first.

Neither MacNaughton nor Chacon are directly involved in NAFTA renegotiations, and did not reveal details about the talks. But both expressed confidence a new deal would be reached despite U.S. and Mexican politics. Chacon noted that Mexico has lawmakers who back NAFTA no matter who wins the presidency.

"We will have a new NAFTA sooner than later," he said, adding that he expects talks will wrap up by the year's end.

In the afternoon, conservative pollster Frank Luntz told the group that the current anti-NAFTA sentiment in the Republican Party had existed for about 15 years but "became an avalanche when Donald Trump took office."

"I never dreamed the Republicans would be hostile to trade," Luntz said. "It's going to take a huge effort to flip that back."

He said that for a renegotiated NAFTA to succeed and be supported by both Democrats and Republicans, the United States must write the rules, hold other countries to its standards, insist on enforcement of the rules and hold all nations accountable.

"If these are the four priorities," Luntz said, "you will get support for trade across America."