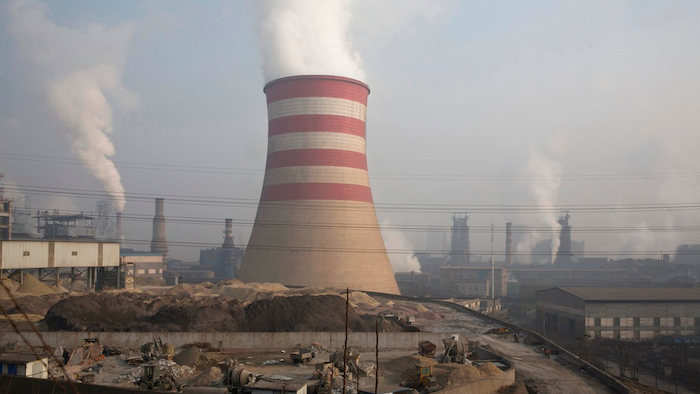 In this Dec. 30, 2016, file photo, smoke and steam spew from the sprawling complex that is a part of the Jiujiang steel and rolling mills in Qianan in northern China's Hebei province. The Commerce Department is urging President Donald Trump to impose tariffs or quotas on imported aluminum and steel. The recommendations unveiled by Secretary Wilbur Ross on Friday, Feb. 16, 2018, are likely to escalate tensions with China and other U.S. trading partners.
AP Photo/Ng Han Guan, File

WASHINGTON (AP) — The Commerce Department is urging President Donald Trump to impose tariffs or quotas on imported aluminum and steel, which it calls a national security threat.

The recommendations unveiled by Secretary Wilbur Ross Friday are likely to escalate tensions with China and other U.S. trading partners. Stepped-up foreign production of steel and aluminum, especially by China, has driven down prices and hurt American producers.

Trump has to make a decision on steel by April 11 and on aluminum by April 19.

Last year, the president ordered an investigation into whether aluminum and steel imports posed a threat to national defense. On Friday, Ross said: "In each case, the imports threaten to impair our national security." He said, for example, that only one U.S. company now produces a high-quality aluminum alloy needed for military aircraft.

On Wall Street, investors reacted by buying the stock of companies that make steel and aluminum. In the early afternoon, shares of United States Steel Corp. were up 10 percent, shares of AK Steel Holding Corp. were up more than 11 percent and shares of Century Aluminum Co. were up nearly 7 percent.

Since the United States joined the World Trade Organization in 1995, it has only pursued two such investigations. Both times — in a 1999 case involving oil imports and a 2001 case involving iron ore and steel imports — the Commerce Department refused to recommend sanctions.

They also say that imposing sanctions on imports will drive up prices and hurt automakers and other companies that use steel or aluminum. In a letter to Trump Monday, a coalition of steel-using companies urged the president "to avoid any decision which would do harm to so many downstream steel manufacturing companies and other steel consumers." It said its members employ 1 million workers in America, compared to 80,000 employed in the steel industry.

China this week appealed to President Trump to settle the steel and aluminum disputes through negotiation. Chinese Foreign Ministry spokesman Geng Shuang said Wednesday that all governments should "spare no effort to avoid negative impacts" on the global economy.

The Trump administration is also considering imposing sanctions against China for forcing American companies to share their intellectual property and stealing trade secrets.