He said 9 million jobs in America are tied to trade and investment with Canada, and that both countries are "winning." 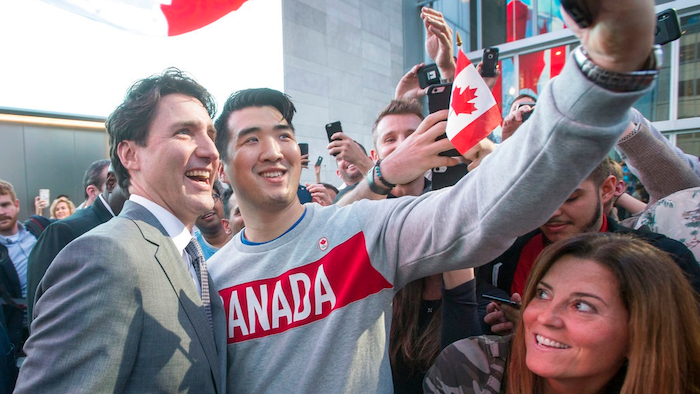 Prime Minister Justin Trudeau poses for photos with employees as he leaves the offices of Salesforce on Thursday, Feb. 8, 2018 in San Francisco.
Ryan Remiorz/The Canadian Press via AP

LOS ANGELES (AP) — Canadian Prime Minister Justin Trudeau came with an unambiguous message on his latest US visit: the North American Free Trade Agreement is a success that needs to be modernized, not abandoned.

With the next round of talks over the trade pact set to begin in Mexico later this month, Trudeau used a speech at the Ronald Reagan Presidential Library on Friday to cast the deal as part of a long history between the two countries that has been beneficial for both.

Yet he also echoed frequent criticism from President Donald Trump, who has threatened to pull out of NAFTA, that too many workers are being left behind in the global economy.

"We need to collectively do a much better job of ensuring the benefits of trade are shared more broadly," Trudeau said.

The speech was a centerpiece on his swing in which he warned Canada won't be muscled into a trade deal that is unfavorable to his country, while promoting Canada as a destination for California technology firms uneasy with shifting U.S. immigration policy.

After the speech, a California Highway Patrol motorcycle officer who was part of Trudeau's motorcade crashed and was sent to a hospital with moderate injuries, the Ventura County Fire Department said. The vehicle carrying the prime minister was not involved and he was not hurt.

Trudeau picked up promises of investments and jobs during his first official visit to San Francisco. Among them: Salesforce CEO Marc Benioff announced the online business software company will invest another $2 billion in its Canadian operations.

He was scheduled to appear on Saturday in Los Angeles, with Mayor Eric Garcetti.

Trump called the 24-year-old agreement a job-killing "disaster" on the campaign trail, and he has threatened to pull out unless the deal requires more auto production in the U.S., while shifting additional government contracts to U.S. companies.

Trudeau argued that the deal has sent benefits both ways across the border.

He said 9 million jobs in America are tied to trade and investment with Canada and "the truth is that both Canada and the United States are winning. And so is Mexico. And that's exactly how we should keep it."

But he added: "President Trump and I agree about this: Too many people have been left behind, even as our economies surged."

But an agreement, he warned, will take "a willingness to compromise on all sides."

The location of the speech carried symbolic weight, alluding to the longstanding trade relationship between the U.S. and Canada. In 1988, Reagan and then-Prime Minister Brian Mulroney signed the first free trade agreement — a precursor to NAFTA.

In his speech, Trudeau made repeated references to the historic connections between the two countries and argued that backing away from NAFTA could unspool deep ties across the continent — with an unknown cost.

The liberal Trudeau argued that differing political views need not stand in the way of trade agreement, alluding to the Republican president.

Reaching agreements has always required "persistence and no shortage of sunny, Reagan-esque optimism on both sides," he said.

Uncertainty over Trump's immigration policies has provided momentum for Trudeau's economic pitch to Silicon Valley, where many companies that rely on foreign workers have become uneasy.

Trudeau also met Thursday with Amazon Chief Executive Jeff Bezos as Bezos considers possible locations for a second headquarters. Toronto, which has created a government-sponsored innovation hub for tech companies, was the only one of several Canadian cities that made the shortlist.

Trudeau's stop in San Francisco highlighted the already strong ties between Canada and California, particularly in research, academia and technology.

While much of the attention on the North American Free Trade Agreement has focused on physical commodities such as vehicle manufacturing, dairy and timber, skilled workers have also become increasingly mobile between the U.S., Canada and Mexico.

Google built its latest DeepMind artificial intelligence facility at the University of Alberta in Edmonton, Canada.