Talks begin August 16th and the Trump administration hopes to address the minimal environmental and wage regulations that have drawn American plants to Mexico. 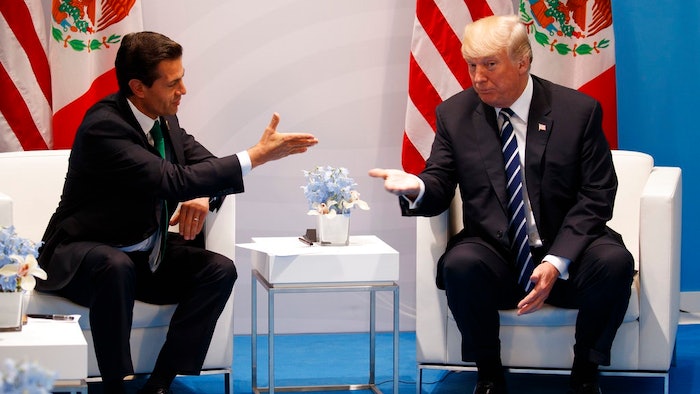 In this July 7, 2017 file photo, U.S. President Donald Trump meets with Mexican President Enrique Pena Nieto at the G20 Summit, in Hamburg. Trump's push to renegotiate the North American Free Trade Agreement is putting Mexico in a tough spot, threatening the system that has helped turn the country into a top exporter through low wages, lax regulations and proximity to the United States. Talks are set for Aug. 16 in Washington D.C.
AP Photo/Evan Vucci, File

MEXICO CITY (AP) — President Donald Trump's push to renegotiate the North American Free Trade Agreement is putting Mexico in a tough spot, threatening the system that has helped turn the country into a top exporter through low wages, lax regulations and proximity to the United States.

With talks set to start on Aug. 16, the Trump administration is targeting the massive U.S. trade deficit with its southern neighbor and the weakly enforced labor, environmental and manufacturing rules that for 23 years have drawn American assembly plants to Mexico and launched a flood of televisions, cars and appliances across the border.

"Mexico was resting on its merits and has been in a comfort zone, and now we have to leave it," Economy Minister Ildefonso Guajardo told a business group recently. "The alarm clock has rung for us to wake up."

A key draw for foreign assembly plants and investment has been Mexico's low wages. While average manufacturing wages in China had risen to $3.60 per hour by 2016, Mexico's had shrunk to $2.10 - a level some economists say is artificially low. With many workers unable to afford the vehicles Mexico produces, the country exports about three times as many cars as are purchased domestically, most to the United States.

"It is a very serious problem," Alex Covarrubias, a labor professor at Mexico's Sonora College, said of the country's wage policy. "Almost all the (labor) contracts that are signed in Mexico are unlawful, which means that they are company contracts, which the workers aren't aware of."

The Trump administration is pressing to bring labor and environmental regulations — originally contained in weakly enforced "sidebar" agreements — into the main body of NAFTA's text, and to require that Mexico's government ensures the "effective recognition of the right to collective bargaining."

Tightening Mexico's labor laws and strengthening unionization could push wages up, or at least stem the flight of jobs to Mexico, experts say.

Guajardo said Mexico is willing to negotiate labor and environmental issues as part of the talks to be held in Washington. "I think it would be progress, to guarantee that the benefits of the agreement are shared among all."

Guajardo appeared to be similarly flexible about making "fine adjustments" to the rules-of-origin in manufacturing, which dictate how much regional content would be required to consider a product "made in North America." Critics have accused Mexico of importing a lot of Chinese or European components, assembling them and labelling them made in North America.

But Guajardo is less convinced by what he calls the Trump administration's "extreme preoccupation" with reducing trade deficits - one of the issues that make Mexican officials bristle.

"Since NAFTA was implemented in 1994, the U.S. bilateral goods trade balance with Mexico has gone from a $1.3 billion surplus to a $64 billion deficit in 2016," the U.S. Trade Representative's Office said in unveiling its plans for renegotiating the accord. "The negotiating objectives also include adding a digital economy chapter and incorporating and strengthening labor and environment obligations that are currently in NAFTA side agreements."

Mexico's CIBanco bank said in a report that most of this deficit is in the auto sector and it could be the main sticking point in the talks.

"The U.S. demands to use the talks to improve its trade balance with NAFTA partners represent the biggest threat to reaching an accord," it said.

Mexico, in turn, wants the redone agreement to include immigration issues while changing as little as possible in trade policy.

It appears to want a better guest-worker program. But U.S. Agriculture Secretary Sonny Perdue said this was not an area "that would be involved in NAFTA renegotiations."

On the whole, it appears Mexico wants to change as little as possible.

Covarrubias, who studies the auto industry and attended some of the consultation sessions in Mexico on NAFTA renegotiation, said he was "very disappointed" to see that the position of Mexico's government and power groups was "we don't want to change a single comma."

"They're just reacting, waiting to see what the Trump administration says, but they don't have anything proactive, any proposal," Covarrubias said.

One change sought by the U.S. is expected to be another thorny issue. NAFTA's Article 19 set up a trade-dispute resolution mechanism that allows binational panels of private experts to decide differences over tariffs.

Canada has vowed to defend the panels, and in Mexico there is pressure not to go back to national courts to resolve disputes, probably because both countries fear it would allow the U.S. to throw its greater weight around.

All of this comes under a deadline: Mexico wants the talks wrapped up before its presidential election season opens up in 2018, because the government fears any concession would become a political football for leftist front-runner Andres Manuel Lopez Obrador.

That's a point where Mexico is almost certain to be disappointed, said ex-U.S. Ambassador to Mexico Antonio Garza.

"I think it's certainly aspirational to talk about the end of the year, beginning of (2018), but I think it's far more realistic to be looking at the end of 2018 maybe even early 2019," Garza said.

Some are more optimistic about the talks to retool NAFTA, which was signed before the latest tech boom, Mexico's opening of its oil industry and Trump's calls to build a wall between the countries.

"One should never let a good crisis go to waste," said Mexico's former ambassador to the U.S., Arturo Sarukhan, adding the talks provide an opportunity to modernize NAFTA.