Craig Stevens, a spokesman for a pro-pipeline coalition, called such protests the "new normal" and the "new cost of doing business." 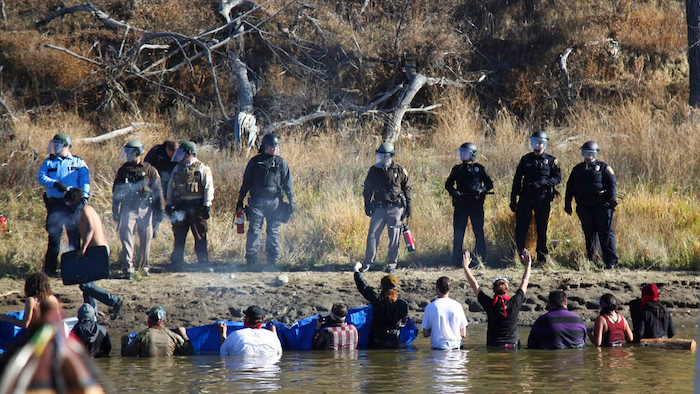 In this Nov. 2, 2016 file photo, protesters demonstrating against the expansion of the Dakota Access pipeline wade in cold creek waters confront local police near Cannon Ball, N.D. Industry officials say protests like the one involving the disputed pipeline may be commonplace in the future. The recently completed $3.8 billion pipeline that's opposed by American Indian tribes and others was discussed Wednesday, July 19, 2017, at an annual oil industry conference in Bismarck with a panel dissecting what was learned from the nearly year-long struggle over building it in North Dakota.
AP Photo/John L. Mone, File

BISMARCK, N.D. (AP) — Well-funded and organized protests like the one involving the disputed Dakota Access oil pipeline may become commonplace, officials said Wednesday as they urged the industry to prepare for such activity.

The struggle over the recently completed $3.8 billion pipeline was discussed at an annual oil industry conference in Bismarck, with a panel dissecting what the industry learned. Native Americans and other opponents worried about the pipeline's effect on the environment established a massive encampment in North Dakota to protest it.

"The opponents will not rest," said Craig Stevens, a spokesman for Grow America's Infrastructure Now, a pro-pipeline coalition of businesses, trade associations and labor groups.

Stevens called such protests the "new normal" and the "new cost of doing business." He said pipelines will be targeted by those wanting to stop the use of fossil fuels, by attempting to "kill the heart by cutting the veins." Stevens said the oil industry must battle what he called misinformation about pipeline projects while touting benefits, such as jobs.

"It is important for us to engage the opposition ... and provide context to the overall debate," Stevens said.

The Dakota Access pipeline began moving North Dakota oil to Illinois on June 1. But a judge has ordered the Army Corps of Engineers to do more study on its impact on the Standing Rock Sioux tribe, which believes the pipeline threatens sacred sites and the Missouri River that provides drinking water for millions of people. Texas-based developer Energy Transfer Partners maintains it's safe.

Troy Eid, a former U.S. attorney in Colorado who specializes in Native American law, said tribal consultation is key in building such projects and something the industry must take "much more seriously."

Based on information supplied by ETP in court documents, delays have cost it more than a half-billion dollars.

Companies can save money in the long run by doing more work with tribes "on the front end," he said.

One-fifth of all oil production comes from in and around American Indian reservations, Eid said.

"Tribes are going to be in this game," he said.