Alleged abuses have plagued Hazaribagh, the hub of Bangladesh's leather industry with more than 150 tanneries. 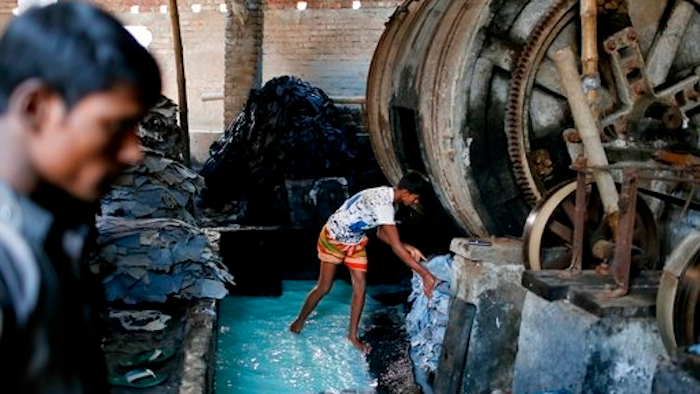 In this Monday, Feb. 6, 2017 photo, a Bangladeshi boy processes animal hide inside a factory at the highly polluted Hazaribagh tannery area in Dhaka, Bangladesh. Hazardous, heavily polluting tanneries with workers as young as 14 supplied leather to companies that make shoes and handbags for Western brands, a nonprofit group that investigates supply chains says.
AP Photo/A.M. Ahad

DHAKA, Bangladesh (AP) — Hazardous, heavily polluting tanneries, with workers as young as 14, supplied leather to companies that make shoes and handbags for a host of Western brands, a nonprofit group that investigates supply chains says.

The report by New York-based Transparentem, released Friday to The Associated Press, didn't say the leather ends up in American and European companies' products, only that the manufacturers of some of those goods receive it.

Some companies say leather in their products was made outside Bangladesh, and manufacturers concur. Still, in response to the report, most brands switched factories, banned Bangladesh leather or demanded improvements.

The abuses alleged have plagued Hazaribagh, the hub of Bangladesh's leather industry with more than 150 tanneries. The air is noxious with an eye-stinging rotten-egg odor; children play on hills of rotting hide trimmings. The Buriganga River, drinking water for 180,000 people, shimmers with chemical runoff and human waste.

The $1 billion-a-year industry was ordered to move more than 15 years ago, but deadlines have passed without consequence. Last week, Bangladesh's High Court banned deliveries of gas, water and electricity to the tanneries. Rawhide supplies have also been ordered halted, yet they're still in business.

Transparentem's confidential Hazaribagh report and accompanying video, shared with about a dozen companies, showed workers at five different tanneries bent double under the weight of soaking wet cow hides, shuffling past heavy machinery. They whip handheld razors through leather. Chemical barrels lean against walls. The floor is wet, some workers are barefoot.

Bangladesh prohibits anyone under 18 from tannery work. The report says that in 2015, a mother confirmed her child at work was 14. Footage from 2016 showed the child still working there. On the video, a teen, 17, told the videographer his age. And there's 2016 footage of two workers agreeing there are 15-year-olds onsite.

Transparentem is not publishing its findings to protect investigators and workers, but shared them with AP.

No one followed a piece of leather produced by a child to a particular purse or shoe.

"We tell brands and retailers what they may not, but should, know about those with whom they do business," said E. Benjamin Skinner, founder of Transparentem. "This gives them the opportunity to use their influence with their suppliers to address questionable activity and advance positive action."

The companies that responded told AP they're committed to ending labor abuse in manufacturing. Some brands, the Bangladeshi companies involved and industry officials disputed the report's findings.

Syed Nasim Manzur, managing director of Apex Footwear and a director at the Apex Tannery, calls Hazaribagh "an environmental disaster" and said they'll soon close their plant there. But he said the report is a "smear campaign," allegations of child labor are unsubstantiated, and Hazaribagh leather doesn't end up in exported products.

Manzur said Apex Footwear and Apex Tannery are separate entities, although they have some owners in common. He said Hazaribagh leather goes to an Apex Footwear factory for local markets, but not to another across the street that produces exports.

"We don't have any child workers," he said.

Coach said they've been getting no more than 1.5 percent of their leather from Hazaribagh and Kate Spade said their share is just 1 percent. Both said they've told buyers to source elsewhere.

Michael Kors and Harbor Footwear said they hadn't knowingly sourced leather there, and won't. Clarks and Deichmann said no Hazaribagh leather ended up in their products.

Sears, Timberland, Macy's, Genesco and Steven Madden also said they weren't getting leather from the tanneries, but were pushing for improvements at the related factories.

Global brands are drawn to manufacturing in Bangladesh by low wages, and leather products are top exports. But the factories depend on domestic tanneries for their leather, and 90 percent of those tanneries are in Hazaribagh.

AP journalists were not allowed inside Apex and Bay's Hazaribagh tanneries, but workers walking out said there weren't children inside.

AP did find children in smaller Hazaribagh tanneries not mentioned by Transparentem, where machines roared and workers had scant protection.

One man tasted liquid from a drum that processes leather to test for salt levels.

"We would hope to avoid the harm that can be caused by the liquid when the body and the limbs are exposed to it," said one worker, Mohammed Harun.

"Consumers should be asking plenty of sharp questions on the shop floor about what retailers are doing to guarantee they are not sourcing leather from Hazaribagh's toxic tanneries," he said.