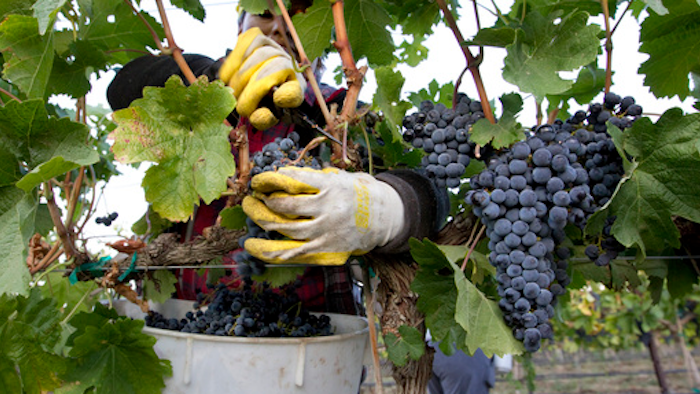 In this Sept. 16, 2014, file photo, Yolanda Gil harvests Merlot wine grapes at the Dineen Vineyards in Zillah, Wash. The state of Washington produced a record harvest of wine grapes in 2016. The Washington Wine Commission reported Wednesday that the 2016 harvest was 270,000 tons, up 22 percent from the previous year.
Gordon King/Yakima Herald-Republic via AP, file

Last year's harvest in Washington, the second-largest producer of premium wines in the U.S., tallied 270,000 tons, beating the state's previous record of 227,000 tons in 2014, according to the Washington State Wine Commission, which represents licensed wineries and wine grape growers.

California is by far the nation's largest wine producer. A preliminary report for 2016 showed that farmers there grew 4 million tons of grapes, up 8.5 percent from the year before but short of a record. California's final report on the grape crush is due March 10.

In Washington, the 2016 haul was up 22 percent from 2015. Red varieties outpaced white, totaling 58 percent of the harvest. Cabernet Sauvignon was the top variety.

"Not only did we see our biggest harvest ever, but it was a great harvest," said Steve Warner, wine commission president. "The weather in eastern Washington cooled down a bit to extend the growing season and allow the grapes some extra time to mature on the vine."

The state has more than 900 wineries, with most of the grapes grown east of the Cascade Range that runs through the middle of the state.

"Our growers and winemakers are extremely excited about these wines," Warner said.

It was too early to say if the record production will affect wine prices in the future, said Heather Bradshaw, a spokeswoman for the wine commission. Prices depend on the worldwide supply of wine and the quality of the vintage, among other factors, she said.

Production of red varieties showed a substantial increase over the previous year, at 39 percent, while white varieties grew by 3 percent. The largest share of the growth in reds was Cabernet Sauvignon, the commission said.

"We attribute the significant growth of our red varieties, especially Cabernet Sauvignon, to a number of positive outcomes in 2016 compared with the previous year," Warner said. "The 2016 harvest was the result of a near-perfect growing season and higher-than-expected grape yields."

Plus, new vineyard plantings are beginning to produce fruit, a trend that's expected to continue, he said.

Merlot was the second-most popular grape produced in Washington. Chardonnay was the top white and third overall, while Riesling was fourth.

Wine grape growers received an average of $1,157 per ton for all varieties in 2016, an increase of $12 over the previous year. Malbec was the most expensive grape, the commission said.

The preliminary report for California found that average prices for all varieties were $750 per ton, up 11.7 percent from 2015. Chardonnay grapes accounted for the most production in California.