Drug Prices Don't Budge Even After Pressure from Congress

In the last two years, House and Senate committees issued more than a dozen subpoenas to price-hiking drugmakers, but of nearly 30 band-name medications being targeted, most haven't changed their pricing. 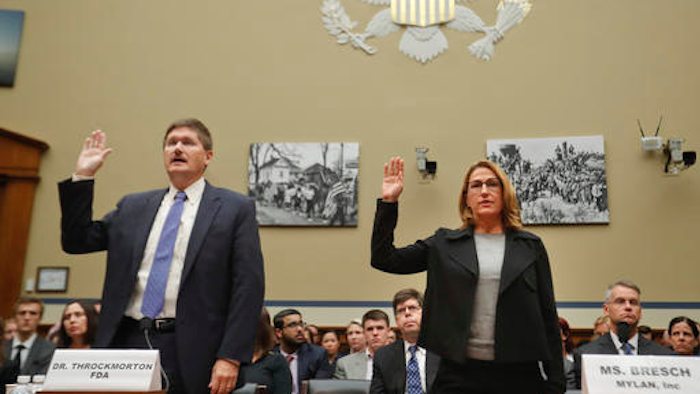 In this Wednesday, Sept. 21, 2016 file photo, Mylan CEO Heather Bresch, right, and Dr. Doug Throckmorton, deputy director, Center for Drug Evaluation and Research, Food and Drug Administration (FDA), are sworn in on Capitol Hill in Washington, prior to testifying before the House Oversight Committee hearing on EpiPen price increases. Bresch defended the cost for life-saving EpiPens, signaling the company has no plans to lower prices despite a public outcry and questions from skeptical lawmakers.
AP Photo/Pablo Martinez Monsivais

WASHINGTON (AP) — Congress's routine of publicly shaming drug company executives over high prices works no better than a placebo: It may make some people feel better, but it doesn't treat the problem.

In the last two years, House and Senate committees issued more than a dozen subpoenas to price-hiking drugmakers, collecting hundreds of thousands of documents and berating executives for more than 16 hours of public hearings.

But a review by The Associated Press of the list prices of nearly 30 brand-name medications and generic versions targeted by congressional investigators shows most haven't budged since coming under federal scrutiny, according to figures from Truven Health Analytics.

"These companies have made clear that they are not going to change course on their own — they will keep bilking the American people for all they can unless Congress acts," said Rep. Elijah Cummings, D-Maryland, the ranking member on the House Committee on Oversight and Government Reform.

Unlike most countries, the U.S. doesn't regulate drug prices. That means drugmakers, like other businesses, are largely free to set prices as high as the market will bear.

Congress has avoided passing laws that would change how drugs are priced, in keeping with the wishes of the powerful pharmaceutical lobby. That leaves lawmakers with few options beyond hauling executives before their committees.

Cummings helped kick off Capitol Hill's latest round of pharmaceutical bashing in the fall of 2014 with a flurry of letters to makers of prescription drugs that had seen dramatic price spikes. Since then, the AP counted 29 drugs that were specifically mentioned either in letters from lawmakers or during congressional hearings. The list prices of 22 of those drugs did not change at all. Five fell, and two went up. Those that fell were generic drugs that received little public attention.

Meanwhile, executives have found ways to defuse some of the public outrage without cutting prices. Under questioning from Cummings and other lawmakers in September, Mylan CEO Heather Bresch pointed to company coupons that can lower the price for EpiPens by up to $300 for some insured patients. While such coupons lower patients' out-of-pocket expenses, insurers foot the bill for the drug, which still carries of list price of $608 for a two-pack, up more than 500 percent since 2007.

Last year, former Turing Pharmaceuticals CEO Martin Shkreli reneged on a pledge to lower the price of the life-saving anti-infection drug Daraprim after raising it 5,000 percent. Instead, his company offered hospitals a sliding discount and the option to buy a 30-pill bottle for $22,500 instead of the original 100-pill bottle, which cost $75,000. The $750 list price per pill didn't budge.

"The industry has cultivated an outrageously complicated and obscure pricing system," said Robert Weissman, president of consumer advocate Public Citizen. "They can give the illusion of various discounts and rebates that sound on their face like price reductions but without really impacting their bottom line."

Even when corporate leaders seem to promise price cuts while under oath, the decreases don't materialize.

Last April, billionaire investor Bill Ackman testified before a Senate committee about Valeant Pharmaceutical's much-maligned strategy of buying niche drugs and raising their prices by as much as 3,000 percent. With the Canadian drugmaker's then-CEO Michael Pearson stepping down, Ackman promised to use his influence on the company's board to try and revamp its pricing strategy.

On two heart drugs that Valeant had acquired and hiked, Nitropress and Isuprel, Ackman suggested price cuts were imminent.

"You can expect from us within weeks, and hopefully sooner, a response to where we're going to price these drugs and it will be meaningfully lower than where they are priced now," Ackman said.

Instead, Valeant kept the list prices the same and expanded existing rebates for hospitals to up to 40 percent.

"That sounds good, but when you raise prices more than 500 percent a 40 percent discount is still egregious," said Scott Knoer, chief pharmacy officer at the Cleveland Clinic.

Valeant said in a statement the rebates were recommended by its internal drug pricing committee, created in the wake of public outrage over its prices. A spokesman for Ackman declined to comment.

"You can have different prices for different customers depending on who has more market share," said analyst Richard Evans of Sector and Sovereign Research. "So you can tailor your pricing somewhat stealthily."

Evans says congressional scrutiny of companies like Valeant has discouraged the most extreme price hikes, generally those above 100 percent. But most of the price inflation squeezing patients and hospitals comes from industry-wide price increases that often total more than 10 percent a year, rather than the drastic hikes targeted by Congress.

Rep. Cummings and his investigative partner, Senator Bernie Sanders of Vermont, unveiled a new strategy earlier this month that could have more teeth than shaming, at least if companies are doing something illegal. Rather than launching another congressional probe, the lawmakers called on the Department of Justice to investigate possible price collusion among manufacturers of insulin, which they say has seen industrywide price increases of more than 300 percent between 2002 and 2013.

There are also some new and long-standing proposals that could stem increases, but they are unlikely to pass Congress, in part because of the pharmaceutical industry's pervasive influence on Capitol Hill. Drugmakers and related health businesses spent more than $235 million on lobbying last year, more than any other industry, according to the nonprofit Center for Responsive Politics.

Investors seem to think the victories of Donald Trump and congressional Republicans have dimmed the prospects for drug price reform even further. Pharmaceutical company shares, which had lagged the broader stock market this year until the election, have dramatically outperformed the market since then.

In the meantime, lawmakers are likely to continue publicly lashing drugmakers, if only to appease constituents. A majority of Americans say lowering drug prices is the most important health care issue that the incoming president and Congress should be working on, according to a recent survey by the Kaiser Family Foundation.

"The big question is whether it remains mostly talk and hearings or whether it amounts to action," said Drew Altman, president of the nonpartisan Kaiser foundation. "At this stage the drug industry is playing a version of Muhammad Ali's rope-a-dope — rolling with the punches and waiting to see how things turn out."