Gunmen still menace pick-and-shovel miners in eastern Congo despite the efforts of local reformers, Western activists, and companies like Apple and Intel. 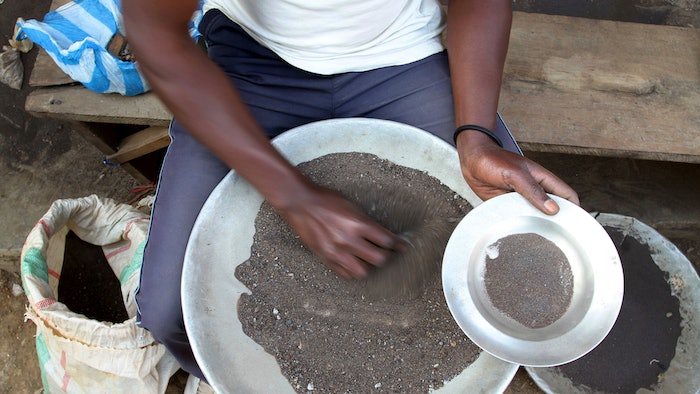 In this file photo a Congolese miner sifts through ground rocks to separate out the cassiterite, the main ore that’s processed into tin, in the town of Nyabibwe, eastern Congo.
AP Photo/Marc Hofer

SAN FRANCISCO (AP) — Violent gunmen still menace pick-and-shovel miners in eastern Congo, a new report finds. This is despite efforts to loosen their grip by local reformers, Western activists, and companies like Apple and Intel that use minerals from the African region in their products.

Conditions are improving for miners who dig the ore that's processed into tin, tungsten and tantalum for smartphones and other electronics, though some still face interference from armed groups. But slumping demand and depressed prices for those minerals have driven many workers to dig instead for gold that's used in electronics, jewelry and other consumer products sold by Western companies.

Those are the findings of an extensive field survey by the International Peace Information Service, a Belgian non-profit whose research is frequently cited by activist groups and policy advisers to European and Western officials. IPIS is releasing its findings today.

The detailed report bolsters the recent observations of activists. "Things are slowly but surely changing," said Holly Dranginis, a senior policy analyst at the Enough Project, a U.S.-based advocacy group. "But armed groups still benefit from gold, and they are wreaking havoc on communities that are near the mines."

IPIS has sent researchers, teamed with industry and government officials, to inspect more than 1,600 mining sites in Congo over the last four years. Nearly 240,000 people, mostly men but many supporting families, work as so-called artisanal (i.e., independent) miners at those sites.

For decades, an assortment of armed rebels, homegrown gangs and corrupt army units have reigned over parts of eastern Congo, where many people live in poverty despite the rich mineral resources underground. These armed groups are known for terrorizing local residents through pillaging, forced labor and sexual assaults on women and girls.

In recent years, Western activists have pressured corporations to stop using conflict minerals from areas controlled by armed groups, which profit from sales of those metals.

The metals are used in a variety of products. But activists have particularly focused on makers of smartphones, computers and other electronic components, since they use large quantities of tantalum in electrical capacitors and tin as solder for circuit boards, along with smaller amounts of tungsten and gold in various components.

Human rights groups also persuaded the U.S. Congress to address the issue in the 2010 financial reform bill known as the Dodd-Frank Act. One section of the law requires corporations to file annual reports showing what they've done to determine if they're using tin, tungsten, tantalum or gold from Congo or neighboring countries.

Though it's been three years since the reporting requirement took effect, most companies say they're unable to trace all the minerals they use, since metals usually travel through complex supply chains that include mines, regional wholesalers, refiners and independent component-makers.

Companies in some sectors, particularly computer and electronics manufacturers, are providing more information each year, according to researcher Chris Bayer, who reviewed company filings for the nonprofit Development International. But he said nearly two-thirds of the 981 companies from all industries that filed conflict mineral reports this year still didn't identify the country of origin for all the minerals they used that are covered by the law.

Still, activists and academics say the Dodd-Frank requirements have prompted companies to examine supply chains and underwrite audits by industry groups that pressure suppliers to stop buying from illegitimate sources. The audits and a tracking system devised by industry and Congo's government are intended to certify that ore comes from mines free of armed interference.

Silicon Valley's Intel is one of very few companies to claim conflict-free status for its microprocessors and chipsets, citing audits of smelters in its supply chain. But Intel says it can't be sure about other products it sells that contain components made elsewhere.

Apple, which also requires its smelters to undergo audits, says it has no indication that any of its products contain minerals that benefit armed groups. But while Apple reports more information than most companies, it stops short of declaring its products "conflict-free" and says those audits may not be enough. Apple also does its own investigations, focusing particularly on gold because it's susceptible to smuggling and weak oversight.

Activists don't want U.S. companies to simply stop using minerals from Congo, because that would hurt miners and their families. But some wholesalers have turned to sources elsewhere. And while the number of artisanal miners working in Congo has remained stable, IPIS estimates about 80 percent, or 193,000 workers, are now digging for gold. They produce about 12 tons of gold each year, worth about $437 million when sold at local trading sites.

IPIS found 64 percent of gold miners working at sites controlled by armed groups — only a slight decline from 67 percent in 2010.

More often than not, the gun-toting groups are units of the Congolese army, known as the FARDC. But the soldiers aren't just there to keep the peace. IPIS found evidence that army units interfered with mining operations, usually by collecting unauthorized taxes, at two-thirds of the sites where they were present.

Other sites were under the control of armed militias, including a rebel group notorious for "looting, extortion, killing and sexual violence" in Congo's Ituri district, IPIS reported.

IPIS researcher Ken Matthysen, who co-authored the new report, estimates the vast majority of Congolese gold is exported outside legal channels. He said it's smuggled into neighboring countries to disguise the true source, and then often exported to the United Arab Emirates.

Industry officials say gold is extremely difficult to trace through layers of wholesalers, refiners and other middlemen. They also blame ongoing civil unrest in the DRC.

"But that shouldn't stop us," said David Bouffard, vice president at Signet Jewelers, a leading retailer that says it works with auditors and industry groups to make sure it doesn't use metal from conflict sources. "We have to help as much as we can."

Meanwhile, about half the miners digging for tin, tungsten or tantalum ore in the Congo are working at sites covered by an industry inspection system. IPIS found 21 percent of 3T miners at sites under the control of armed groups. That's a big improvement from 57 percent in 2010.

But experts say the "tag and trace" system used for tracking 3T ore isn't perfect. U.N. advisers reported last year that 3T minerals were still being smuggled from Eastern Congo into Rwanda. They also found a black market for altered or counterfeit tags. A separate report by the Enough Project, a human rights group, found Congolese inspectors are poorly paid and susceptible to bribes.

Tantalum mines in eastern Congo are still vulnerable to violence, according to the Enough Project. Its report cited an incident in January 2016 when a group of Congolese soldiers fired on civilian miners in the town of Rubaya, injuring nine people.