Distribution spending remains a priority for Amazon, whose parcel volume was an estimated 1 billion packages in 2015. 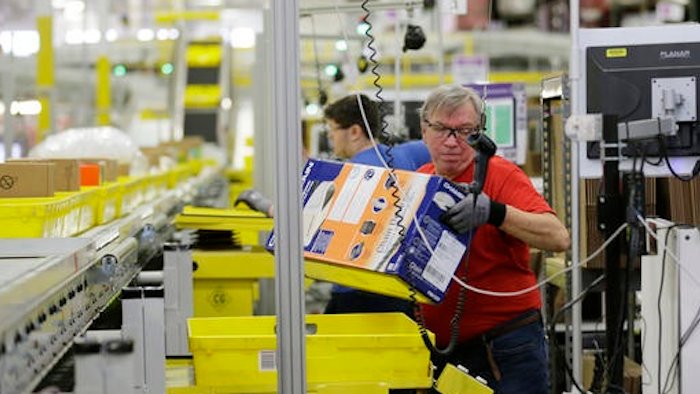 The crux of Amazon’s $99 annual Prime loyalty program is its free two-day shipping option. Amazon continues to invest heavily in improving its distribution: Building more distribution centers and looking to the future by partnering with the U.K. to speed up drone testing and readying its own fleet of cargo jets.
AP Photo/Ted S. Warren, File

NEW YORK (AP) — Online shoppers want their packages — now. And Amazon is spending heavily to make sure that happens.

Amazon's Prime service has, at heart, always been about free two-day shipping. The $99 annual subscription includes a variety of other goodies, but the near-instant gratification of fast, no-extra-cost delivery was the program's original draw, and remains central to its appeal for its estimated 60 million subscribers.

But fast delivery — everything from Prime's two-day service to one-day or one-hour options, grocery delivery and delivery for third party sellers — doesn't come cheap. In the April-June quarter, for instance, Amazon spent $3.88 billion on its distribution network, or what it calls "fulfillment," up 35 percent from the prior year. The company spent $13.41 billion on fulfillment in all of 2015, up 25 percent from the prior year — and fully 13 percent of its $104.8 billion in total operating expenses.

"Costs to 'fulfill' products is one of their largest expenses, and they're always trying how to figure out how to manage it better," said R.W. Baird analyst Colin Sebastian. "In the long term, creating more infrastructure for transportation and delivery will help drive more efficiency, but it adds to costs in the near term."

Such heavy investment is a big part of what keeps Amazon's profit margins low relative to other big retailers. That's intentional; the reinvestment has let Amazon open up new business lines such as its Amazon Web Services cloud-computing business, production of original TV shows and movies, and smart-home products such as its Amazon Echo device.

Still, distribution spending remains a priority. Amazon's parcel volume was an estimated 1 billion packages in 2015 — the same number that FedEx delivered three years earlier for hundreds of thousands of customers, according to Satish Jindel, president of shipping consultant ShipMatrix. With volume growing yearly in the high teens or 20-plus percent, Amazon "cannot rely upon third parties entirely to handle that large volume," he said.

So the company has been furiously building out both distribution centers, where workers and robots pull products off shelves and package them for delivery, and smaller sorting plants, which sort the package flow by ZIP code for faster delivery. Although Amazon briefly slowed its pace of distribution-center construction over the 2015 holidays and into 2016, it has announced 17 new fulfillment centers in the U.S. alone since March, notes ChannelAdvisor executive chairman Scott Wingo.

The company says it has 123 distribution centers globally and more than 23 sorting centers. Amazon is building more infrastructure in the third quarter ahead of the busy holiday season. By the end of September, it plans to have added 21 new global fulfillment centers in 2016; at the same point in 2015, it had added only 10.

Amazon has also increasingly focused on more futuristic methods of delivery. On Tuesday, the Seattle company said it will work with the U.K. government to test using drones for delivery. The goal is to eventually deliver packages by drones in less than 30 minutes.

The company has also leased 40 cargo planes from Boeing and Atlas Air to create an air cargo network. Amazon says it doesn't plan to build its own delivery service, and is just looking to work more closely with package-delivery services such as the U.S. Postal Service, FedEx and UPS. Still, the cargo fleet and drone experimentation are clear steps in taking more control in the delivery process.

"If they're building out infrastructure that could ultimately be a third party (delivery) service, that's potentially interesting," Sebastian said. "We're still trying to understand what their ultimate goals are."