How Would Bayer-Monsanto Affect Workers & Farmers?

The deal would create a global giant in agriculture technology touching much of global food production. 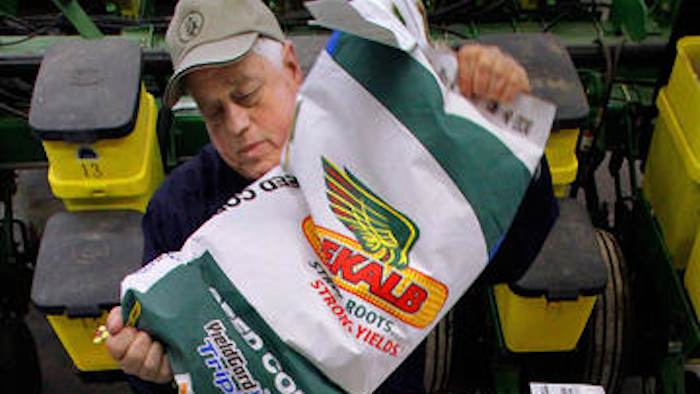 In this April 4, file 2011 photo, central Illinois corn and soybean farmer Gary Niemeyer readies his DEKALB seed corn for spring planting at his farm near Auburn, Ill. German drug and chemicals company Bayer AG announced Monday, May 23, 2016 that it has made a US$ 62 billion offer to buy U.S.-based crops and seeds specialist Monsanto. The proposed combination would create a giant seed and farm chemical company with a strong presence in the U.S., Europe and Asia.
AP Photo/Seth Perlman, file

FRANKFURT, Germany (AP) — Bayer wants to buy Monsanto for $62 billion, hooking up the German chemical and drug company with the St. Louis-based producer of seeds and weed-killers.

The deal would create a global giant in agriculture technology touching much of global food production through the development of seeds and pesticides.

Here's a look at the deal and what it would mean for farmers, workers, consumers and investors.

Q: Who wants to buy whom?

A: Bayer is offering to acquire Monsanto, which makes seeds for fruits, vegetables, corn, soybeans and cotton, as well as weed-killer Roundup. It has more than 21,000 employees worldwide, about half of whom work the U.S. in 33 states.

Bayer, headquartered in Leverkusen, Germany, employs some 117,000 people worldwide. It makes pharmaceuticals, over the counter medicines such as Aleve and Alka-Seltzer, and farm chemicals.

Bayer said Monday the all-cash offer values shares of Monsanto at $122 each. That compares with a closing price Friday of $101.52 and is 37 percent higher than the closing price of $89.03 on May 9, the day before Bayer made a written proposal to Monsanto.

Q: Why would Bayer want to buy Monsanto?

A: The takeover would create the world's largest seed and farm chemical company with a strong presence spread across the U.S., Europe and Asia.

Bayer says that combining research and development as well as product lines would make the two companies worth more together than separately. The combined company would have higher earnings and save $1.5 billion a year by eliminating overlapping functions and overhead.

They would combine different regional strengths: Monsanto is big in the United States, while Bayer has a larger presence in Europe and Asia.

Q: So why are investors skeptical? Bayer shares slumped 5.7 percent Monday, off 12.5 percent since Bayer confirmed it was in talks with Monsanto.

A: One reason: Part of the deal will be paid for by issuing new shares. Shareholders either pay to sign up or see their share of earnings shrink through dilution of their holdings.

Another reason: Some investors may have bought Bayer due to its primary focus on pharmaceuticals and might not be so interested in getting a stake in a seed company.

Q: Why is that a problem?

A: A more complex company with a wider range of business operations can trade at lower prices than a more focused one. "What we find is that larger firms and more diversified firms are valued less than a single highly specialized firm," says Michael H. Grote, professor of finance at Frankfurt School of Finance & Management and an expert on mergers and acquisitions. "In general market participants think the more diversified the firm, the harder it is to manage."

Not only that. Buying an outside business sends a subtle message that the company's existing operations are "less profitable," Grote said.

He said the 12 percent drop in Bayer shares was larger than the usual 4 to 5 percent dip seen after a takeover announcement.

A: Yes. There's the fact that some people don't like Monsanto's business in selling genetically modified crop seeds. Such seeds have been blocked in some countries and been a subject of anxiety among some consumers and the target of environmental activists.

The pluses of the deal must have seemed stronger to Bayer CEO Werner Baumann. But "it's on the negative side, if you add up the pluses and minuses," said Grote.

A: Unlikely. Political resistance to genetically modified crops remains strong in Europe. Monsanto has only one product there, a pest-resistance variety of maize, and has given up on applications for more after officials failed to act on them despite approval by the European Food Safety Authority.

Liam Condon, head of Bayer's crop science division, said that "the whole discussion is a political one and we don't see that changing anytime soon."

Q: What's going to happen to people who work for Monsanto?

A: Bayer says the head office for the combined seed business will be in St. Louis, Missouri, where Monsanto is headquartered.

But some jobs probably have to be lost somewhere to achieve the advertised savings, says Grote.

Neither company offered any detail on that issue. Chief Finance Officer Johannes Dietsch mentioned marketing and research and development as two areas where synergies could be found.

A: The St. Louis region has lost several other corporate headquarters to mergers in recent years. Monsanto's corporate office for all phases of its business is in one St. Louis suburb, Creve Coeur, and its research hub is in another, Chesterfield. All told, the company employs more than 5,000 workers in the St. Louis region.

St. Louis was once home to several Fortune 500 companies, but mergers in recent years have changed that. The most significant corporate loss was in 2008, when Belgium-based InBev bought Anheuser-Busch, the beer maker long identified with St. Louis.

Q: What would the deal mean for farmers?

A: Bayer says that its customers will get a broader range of products such as seeds and pesticides that work better together. New products and innovation would increase the amount farmers can growth from a given acreage. Bayer executive Condon said that "at the end of the day, what we are trying to do is increase farmers' yields."

The question is whether the company would become so dominant that it could hike prices.

Analyst Ulrich Huwald at Warburg Research said that the combined company would control 28 percent of the world's market for pesticides and would have a "strong presence" in the U.S. market for corn and soybean seeds. Anti-trust regulators will scrutinize the deal to see whether it means less competition.

Mergers and acquisitions expert Grote said that "big players have some ability to set prices higher."

But the impact on how much farmers would pay is impossible to determine at this point, he said.

Jim Salter in St. Louis contributed to this story.