"I wish to God this thing would work and steel mills would come back," said one steelworker in Canonsburg, PA. 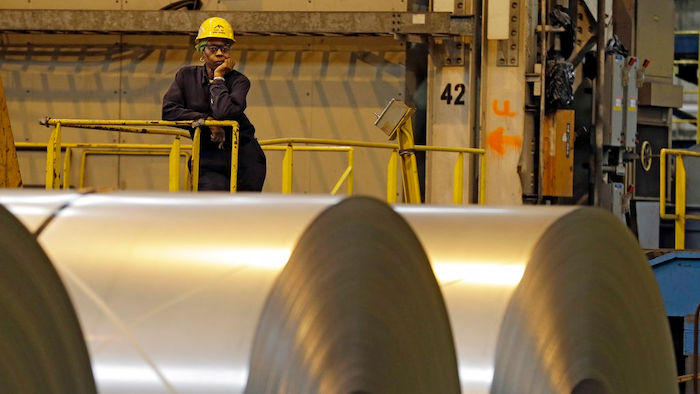 In this Feb. 15, 2013, file photo, an employee looks on from behind coils of steel as acting Secretary of Labor Seth Harris speaks to workers after a tour of ArcelorMittal Steel's hot dip galvanizing line in Cuyahoga Heights, Ohio. President Donald Trump’s tariffs are expected to raise prices for steel and aluminum in this country. That will help domestic producers and could create several hundred new steelworker jobs.
AP Photo/Mark Duncan, File

In the heart of America's diminished steel country, support for President Donald Trump's tariffs on imports is broad and bipartisan. It is tempered, though, by a strong streak of realism.

But the tariffs aren't going to return American steel anywhere close to its peak output in the 1970s. Even some steelworkers feel it in places like Canonsburg, Pennsylvania, about 20 miles southwest of Pittsburgh.

People in Canonsburg are proud of their past. A statue of singer and native son Perry Como adorns downtown. The borough claims to have the second-largest July Fourth celebration in the state, behind only Philadelphia. Coal and steel once dominated the landscape, but many of the mills have closed in recent decades.

The details of the Trump administration's tariffs — 25 percent on foreign steel, 10 pecent on aluminum — are still unclear, and that helps explain why they are likely to have limited effect.

The president exempted Canada and Mexico temporarily while they renegotiate the North American Free Trade Agreement with the U.S. Other countries also want to be excused. European nations are threatening to retaliate with tariffs against some American products.

History suggests the tariffs could be temporary, which would further blunt their impact. That's what happened to former President George W. Bush's 2002 steel tariffs, which were withdrawn due to potential retaliation. And while tariffs might help a few steelworkers they could hurt many more workers in autos and other industries in the Midwest steel states that helped elect Trump in 2016.

Ned Hill, an Ohio State University professor who studies manufacturing including the steel industry, said the tariffs will be symbolic but useless. He said that because the tariffs are perceived as temporary and will exempt some countries and steel products, most U.S. steel companies won't make the multi-billion-dollar investments needed to make older mills competitive.

A few companies, however, are planning to fire up long-idled mills and smelters:

— United States Steel Corp. says it will restart a blast furnace in Illinois and recall 500 workers.

— Alcoa Corp.'s partial reopening of an aluminum smelter in Indiana, announced last year, is expected to happen this spring.

— Nucor Corp. announced in November that it will open a new micro mill in Missouri in 2019, creating about 255 jobs.

Even those hundreds of jobs will hardly be noticed in a nationwide labor market of more than 150 million people.

Employment in the steel industry peaked at 650,000 jobs in 1953. With lower production and more automated plants, mills don't need as many workers today. By the start of this year, there were 143,000 steelworkers.

The tariffs were announced as American steel has turned more profitable. Thanks to rising prices because of strong demand in a growing economy, the domestic steel industry made $2.8 billion last year after losing money as recently as 2015. Aluminum prices have been rising too.

U.S. steel production fell sharply in 2009 as the world reeled from the global financial crisis. Despite a partial recovery, total domestic production fell 20 percent from 2007 to 2016, according to figures from the International Iron and Steel Institute.

China only accounts for 2 percent of U.S. imports, but global prices have fallen as China has ramped up its production over the past decade, putting pressure on U.S. producers.

For much of the last century, coal mining and steel mills were the key industries in Washington County, Pennsylvania. The region prospered from a boom in demand to build highways, suburbs and skyscrapers, all requiring steel. That demand peaked in the 1960s, but many of the mills were shut down by the 1990s.

Tariffs are popular in the region around Pittsburgh.

"There is a rich heritage of steel production in southwestern Pennsylvania. This may help bring that back — we're hoping anyway," says Tim Solobay, the Canonsburg fire chief and a former Democratic state lawmaker. "It could be a really good positive for jobs, economic growth, economic development."

U.S. aluminum production peaked in 1980. The number of operating smelters has slumped from 23 in 1993 to five today, and imports have risen to account for 64 percent of the aluminum consumed in the U.S.

Several hundred people turned out Friday in New Madrid, Missouri, to hear the news that Magnitude 7 Metals will open a smelter on the site of a Noranda Aluminum plant that closed two years ago.

"It devastated this area" when Noranda closed, said W.D. Prince, a 72-year-old barber whose son and son-in-law lost their jobs at the smelter. "Those were good jobs — $24, $25 an hour. All the overtime you wanted."

The new smelter figures to be a big employer in the town, which sits in Missouri's impoverished Bootheel area, but it will offer only half the 900 jobs that were lost when Noranda shut down.

Bob Prusak, the CEO of Magnitude 7 Metals, said in an interview that Trump's tariff plan "gives us a fighting chance." He said one production line will start running in May, the second in November, and maybe the plant might someday provide another 450 jobs.

Philip Gibbs, an analyst with KeyBanc Capital Markets, said mills and smelters will have to run closer to full capacity to replace imports that get priced out of the U.S. market, providing a short-term kick, but he doesn't expect many more mills to restart besides those already announced.

"The tariffs will allow the mills to feel like somebody has their back, and it will probably help them put a little more money in their pocket," Gibbs said. "But further job growth? I don't see that, not dramatically."