The workers will be trained and empowered to develop broader retail skills. 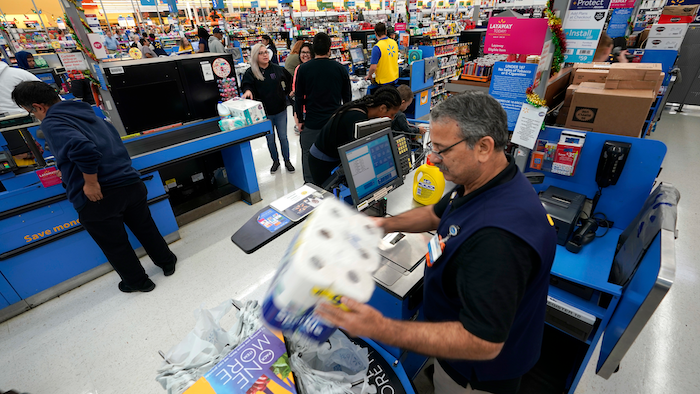 In this Nov. 9, 2018, file photo Walmart associate Javaid Vohar, right, checks out customers at a Walmart Supercenter in Houston. Walmart says it is testing higher wages for new hourly positions at 500 of its U.S. stores as part of an overall strategy to better empower its staff.
AP Photo/David J. Phillip, File

NEW YORK (AP) — Walmart says it's testing higher wages for new hourly positions at 500 of its U.S. stores as part of an overall strategy to better empower its staff.

The nation's largest private employer, which operates roughly 4,700 namesake stores in the U.S., says it will be raising the starting hourly wages to $12 from $11 for these new roles.

These workers will be trained and empowered to develop broader retail skills. For example, they'll help solve problems like inventory issues instead of only completing tasks given to them by managers, according to Jami Lamontagne, a Walmart spokeswoman.

The moves come as Walmart, like many other retailers, is under pressure to improve customer service as it fights online behemoth Amazon.

Walmart Inc. raised its starting pay to $11 an hour in early 2018. That still lags other rivals like Target. In 2017, Target announced a plan to raise starting hourly wages to $15 by the end of this year. Target's starting wage is currently at $13 per hour. Amazon, jumping out ahead of the pack, raised the minimum wage for hourly workers to $15 in late 2018.

“'Retailers are increasingly in competition for decent workers,” he said. "They have to pay more to get employees who are competent.''