Protesters Have Fears Over Dot-Org Sale

Some fear soaring costs if for-profit company is in charge of registering .org websites. 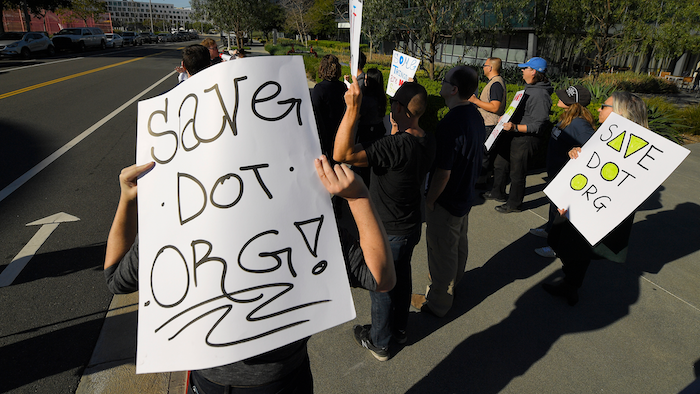 About 15 people protest Friday, Jan. 24, 2020, in Los Angeles outside the headquarters of the regulatory body for domain names, the Internet Corporation for Assigned Names and Numbers. The company that controls the dot-org online universe is putting the registry of domain names up for sale, and the nonprofits that often use the suffix in their websites are raising concerns about the move. ICANN is meeting this weekend and is expected to rule by mid-February on plans by private-equity firm Ethos Capital to buy the Public Interest Registry for $1.1 billion.
AP Photo/Mark J. Terrill

LOS ANGELES (AP) — The company that controls the dot-org universe is trying to sell the online registry to an investment firm for more than $1 billion, drawing opposition from activists who protested Friday and others who fear costs would soar if a for-profit company is in charge of registering the website suffix.

About 20 people representing nonprofits rallied outside the Los Angeles building housing the organization that oversees domain names, the Internet Corporation for Assigned Names and Numbers. ICANN is meeting this weekend and is expected to rule by mid-February on plans by private-equity firm Ethos Capital to buy the Public Interest Registry for $1.1 billion.

Holding signs saying, “Save Dot Org," and chanting, “ICANN, you can stop the sale," opponents said they were concerned that the cost of registering a dot-org website will skyrocket. They also worry about the potential loss of freedoms of speech and expression if the registry is in the wrong hands.

“Who is going to stand up when the pressure comes from the owners of this private equity firm to get more money off their investment and to raise domain prices?" said Elliot Harmon, activism director of the Electronic Frontier Foundation. "Who is going to stand up for nonprofits when governments come along that don’t have the civil society’s interests at their best hearts, asking them to take down the websites of their critics?”

Ethos Capital and the Internet Society, which runs the registry now, said those concerns are misplaced and the sale is being misunderstood.

They said in a statement that prices will remain low, the registry's managers will stay in place and the infusion of capital will ensure the long-term growth of dot-org. They also rejected assertions that online content would be spied on and censored.

“This notion is baseless and, frankly, a demonstration of the type of speculation that has taken the discussion surrounding the future of .ORG irresponsibly out of context,” the statement said. “Ethos and PIR take freedom of expression very seriously, and the registry's commitment to free speech will continue unabated.”

The protesters hoped to give an ICANN board member a letter signed by 35,000 supporters urging it to block the sale. After two hours, they were beginning to walk away when most of the board emerged to meet with them.

Chairman Maarten Botterman said ICANN is looking at the impact of the sale and what guarantees they could obtain for dot-org registrants, though he made no promises.

“I think they also understand that if they’re going to destroy the image of dot-org, that they have a problem,” Botterman said.

The signatures presented were backed by 700 organizations, including Greenpeace, Consumer Reports, Farm Aid, Girl Scouts of the USA and the American Bible Society.

Domain names such as apnews.com have historically been used by computers to find websites and send email, and their value grew as companies and groups adopted them for branding. The Associated Press, a nonprofit, also uses a dot-org domain, ap.org.

Speculators have registered a variety of names under popular domain suffixes such as dot-com and dot-org, and an easy-to-remember name can fetch millions of dollars in the resell market. Owners of popular suffixes can collect hundreds of millions of dollars a year in registration fees.

Though domain names are less prominent these days as more people reach websites using search engines and apps, they are still important for email addresses, billboards and other non-digital advertising.

The dot-org suffix has the distinction of being one of the original domains created in the mid-1980s.

Since 2003, dot-org has been managed by the Public Interest Registry at the Internet Society, a nonprofit founded by many of the internet's early engineers and scientists. In that role, the registry collects annual fees of about $10 from each of the more than 10 million dot-org names registered worldwide.

The Internet Society uses some of that money to finance its advocacy and administrative programs, which include creating technical standards for the internet.

It said proceeds from the sale will fund an endowment to provide more diversified and sustainable resources long term. The group described Ethos Capital as “a mission-driven firm" committed to continuing the registry's operations.

Although dot-org is often associated with nonprofit organizations, it can by registered by anyone, including for-profit corporations and individuals. That won't change with a new, for-profit owner.

Ethos has committed to limiting price increases to 10% a year — the same cap that had been in place until ICANN lifted it in June 2019.

Critics also fear a new owner could change policies and reduce protections for domain name owners, including non-governmental organizations that operate in authoritarian countries. A website can suddenly become unreachable, for instance, if the suffix owner decides to suspend a registration.

Several advocacy groups, including the EFF and Public Knowledge, wrote a letter to the Internet Society insisting that dot-org “be managed by a leader that puts the needs of NGOs over profits."

The suffix has been in for-profit hands before. Before the Public Interest Registry, Verisign Inc. and its predecessor, Network Solutions, managed dot-org, along with dot-com and dot-net.