It marks a reversal for a company that abandoned smartphones following lackluster demand and an ill-fated purchase of Nokia. 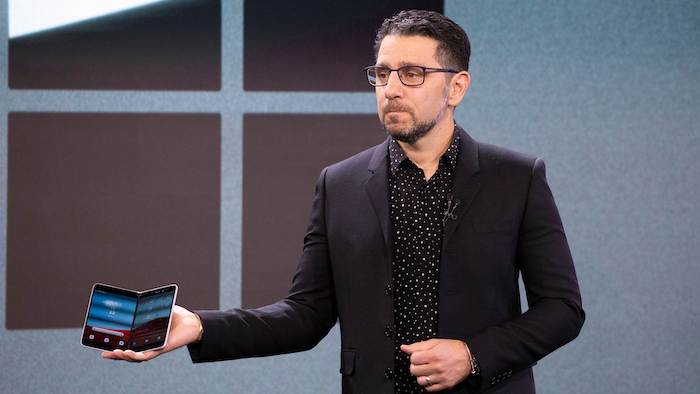 NEW YORK (AP) — After high-profile flops, Microsoft is getting back into smartphones with a dual-screen Android device that won’t be out for another year. Microsoft unveiled the Surface Duo as part of a new lineup of Surface computers. It marks a reversal for a company that abandoned smartphones following lackluster demand for its own operating system and an ill-fated purchase of smartphone maker Nokia.

“I believe the third time's a charm for Microsoft and smartphones,” said Patrick Moorhead, an analyst with moor Insights & Strategy. He said Microsoft has had a good track record with Surface devices, while the Duo’s novel design offers something new at a time when phone innovation has been slowing down.

Microsoft says the Duo makes phone calls, though it stopped short of calling it a phone. Though it runs Android, the back of the prototype has a Surface logo that resembles Windows. The company prefers calling the Duo just another Surface device.

Microsoft also announced a dual-screen Surface Neo tablet, which also won’t be out until late next year. In a blog post, Microsoft said other manufacturers including Asus, Dell, HP and Lenovo will also make dual-screen and foldable devices using a variant of Windows called 10X.

Both Surface devices feature two screens connected with a hinge and can fold like laptops. They can display separate apps side by side or a single app stretched across both screens. They are technologically less ambitious than foldable phones from Samsung and others, whose screens actually bend as the devices close. Some of those folding phones have experienced technical difficulties.

The Duo is about the size of a large smartphone when folded, with two 5.6" displays, while the folded Neo is similar in size to a small tablet such as the iPad Mini or an Amazon Fire. The devices will initially be available only for developers who create and test apps. Microsoft plans to start selling them during the 2020 holiday season. The company offered no details on price.

At a product event Wednesday in New York, Microsoft also unveiled two new Surface Pro tablets. The Surface Pro X will have a 13" screen, rather than the 12" ones on the new Pro 7 and older models. But the X will be about the same size overall, thanks to a smaller bezel.