Although they haven't stolen any lunch money yet, 'ICEing' and 'rolling coal' are becoming popular ways to pick on EVs.

Poor Tesla. It seems that’s it always a target. Whether it’s the company falling short of production goals or its owner and founder being called out for odd rants on social media, it just can’t escape public scrutiny.

And while I’m totally in favor of keeping companies and their leadership accountable, I’ve never understood the need to go out of one’s way to make things harder for others. You know, like parking a big truck in front of a charger for electric cars, or shouting expletives in a parking lot due to the presence of a particular car brand.

Yet, that’s what a number of Tesla owners around the country are experiencing. A report on BusinessInsider.com explains a growing trend where drivers of large trucks are intentionally parking in spaces reserved for Tesla charging stations. It’s a practice referred to as ICEing – borrowing the acronym from their Internal Combustion Engine-powered vehicles.

In fact, according to the Business Insider article, one driver experienced a situation in North Carolina where a group of trucks blocked all the charging spots and began chanting, and I’m paraphrasing here, “F Tesla.” Only it wasn’t F, it was, you know, that word that got Ralphie sucking on a bar of LifeBuoy.

This occurred at a Sheetz convenience store about 40 miles northwest of Charlotte. An employee eventually convinced the group to disperse. Tesla leases hundreds of such charging locations from third parties across the country.

Other electric vehicle drivers have also been exposed to “rolling coal” displays by drivers of diesel trucks. These vehicles are modified to supply the engine with excess fuel. Much to the displeasure of those to the rear of these vehicles, that fuel is emitted in a thick cloud of black exhaust when accelerating.

Both practices are illegal, but that doesn’t seem to be enough of a deterrent for picking on Tesla drivers and electric vehicle owners. However, my advice for these ICE bullies would be to watch their backs.

AAA recently found that 20 percent of all Americans plan on making the next vehicle they buy an EV. And according to research from Bloomberg, by 2040 54 percent of global vehicle sales will be for electric models. Very soon these gas-guzzling tough guys will become a minority. 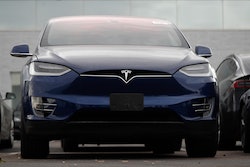