The proposed penalty of more than $1.9 million was the result of a January 23, 2017 inspection during which the agency found 51 safety and health violations. It was during this time that the agency also learned of a machine operator who suffered a broken pelvis on a metal fabrication machine, and coworkers who suffered chemical burns when cleaning a sludge tank — and were then told by supervisors to return to work.

A spokesperson from Aluminum Shapes reached out to IEN and offered the following statement:

"Aluminum Shapes LLC takes the safety of its facility extremely seriously. Prior to OSHA’s findings, and as part of our larger revitalization and modernization efforts, we began working to improve safety throughout our facility, tripling the number of safety professionals, hiring an OSHA specialist to help guide our compliance efforts, and adding a widely-respected safety professional to our management team. These improvements have made a significant, positive impact on our culture.

We have been diligent in addressing the issues OSHA cited in past inspections. The vast majority of the issues raised in these past inspections were addressed before OSHA’s latest visit. The investments we have made in the facility—from the millions of dollars we have put toward safety improvements to the new equipment that is safer and more efficient—are working.

In 2015, Congress passed the Federal Civil Penalties Inflation Adjustment Act Improvements Act. Before that time, OSHA's maximum penalties had not been raised since 1990. As a result, the agency felt the penalties had lost their effectiveness, so they increased max penalties by 78 percent, from $70K to $124,709.

The new method adjusts for inflation, but is capped at 150 percent of the existing penalty amount. The current penalty for willful or repeated violations is $126,749 per violation.

At the urging of Aluminum Shapes, we also reached out to Shawn Dougherty, the spokesman for the Teamsters Local 107, which represents employees at Aluminum Shapes, but he did not respond to requests for comment.

We reached out to OSHA and a representative stated that the agency had not yet heard from Aluminum Shapes. According to OSHA, the company had yet to respond to the citations.

When asked if/when the company planned to respond to the citations, the spokesperson from Aluminum Shapes declined to comment.

In a press release, Paula Dixon-Roderick, director of OSHA’s Marlton Area Office, said, “Despite its lengthy OSHA history, Aluminum Shapes still does not comply with federal safety and health standards … These hazards leave workers vulnerable to the risk of serious injury and possible death.” 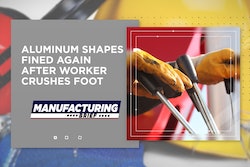