The company has failed to produce materials requested more than two months ago. 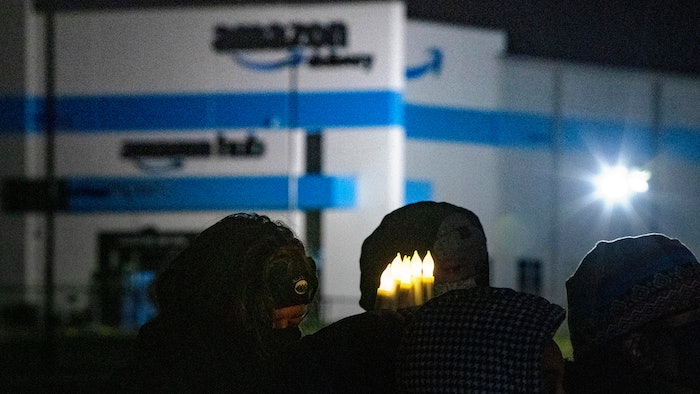 A person holds six electric candles symbolizing the six workers who died while working at the Edwardsville Amazon site in the background, during a vigil, Friday, Dec. 17, 2021, in Edwardsville, Ill., after part of the building collapsed due to a tornado the previous week before.
Derik Holtmann/Belleville News-Democrat via AP FIle

Amazon has been “obstructing” a congressional investigation into the company’s labor practices during severe weather events by failing to produce materials requested of them more than two months ago, according to a letter members sent to CEO Andy Jassy.

The House Committee on Oversight and Reform, which launched the investigation in late March, had given the Seattle-based e-commerce company a list of materials to hand over by mid-April. But the company “still has not produced any of the key categories of documents identified by Committee staff, let alone the full set of materials the Committee requested in March,” said the letter, signed by the committee chairwoman, Rep. Carolyn B. Maloney, a Democrat from New York, as well as progressives Reps. Cori Bush and Alexandria Ocasio-Cortez.

“Unfortunately, Amazon has failed to meaningfully comply with the Committee’s requests, obstructing the Committee’s investigation,” they wrote in the letter made public on Thursday. Amazon did not immediately reply to a request for comment.

The company's labor policies during extreme weather events has been under more scrutiny since the deadly collapse of a company warehouse in Edwardsville, Illinois in December, where six people died and another was critically injured in the tornado strike. Last month, the Occupational Safety and Health Administration wrapped up its own probe into the incident, concluding that Amazon met minimal federal safety requirements for storm sheltering. But regulators also found safety risks and called on the company to improve its procedures.

The House letter said the company has not produced any internal communications related to the Edwardsville tornado to the committee, which is doing its own investigation. “Over the course of nearly seven weeks, Amazon produced only an incomplete set of policies and procedures,” the letter said.

The committee is also seeking documents showing how Amazon managed its workforce during other natural disasters, including wildfires in California in 2018.