More than 200 workers claim exposure to the ash caused them a slew of illnesses. 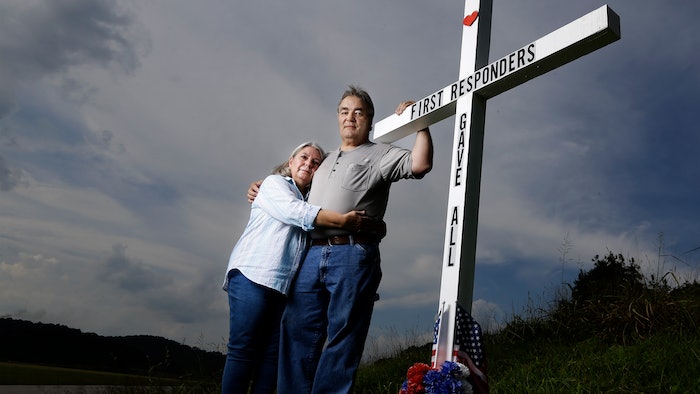 In this Aug. 6, 2019, photo, Ansol and Janie Clark pose at a memorial Ansol Clark constructed near the Kingston Fossil Plant in Kingston, Tenn. The Tennessee Valley Authority was responsible for a massive coal ash spill at the plant in 2008 that covered a community and fouled rivers. The couple says the memorial is for the workers who have come down with illnesses, some fatal, including cancers of the lung, brain, blood and skin and chronic obstructive pulmonary disease. Ansol Clark who drove a fuel truck for four years at the cleanup site, and suffered from a rare blood cancer, has also died now.
AP Photo/Mark Humphrey, File

A contractor hired to clean up the nation's worst coal ash spill is not immune from being sued by workers who say they were not properly protected, the 6th U.S. Circuit Court of Appeals ruled last week.

More than 200 workers blame Jacobs Engineering for exposing them to ash they say caused a slew of illnesses, including cancers of the lung, brain, blood and skin.

A Knoxville, Tennessee, jury in 2018 took only a few hours to decide that Jacobs — a contractor hired by Tennessee Valley Authority — breached its duty of care to the workers, exposing them to airborne “fly ash” with known carcinogens. The jurors said Jacobs’ actions were capable of making the workers sick. Whether those actions actually did make them sick, and thus eligible for monetary damages, was left for a subsequent trial or trials.

The federal judge in the case ordered mediation, alluding to many workers' urgent need for medical care. More than three years later, the two sides have not been able to come to an agreement and a new trial date has not been set.

In the meantime, Jacobs has challenged the workers' right to sue. In the question decided last week, Jacobs argued that TVA was immune from lawsuits because it is a federal public utility, and that protection extends to the contractor through derivative immunity.

In its ruling, the federal appeals court panel found that TVA is not immune from suit and neither is Jacobs. The court notes that Congress, in creating the TVA, wrote a clause into statute specifically providing that the utility can “sue and be sued in its corporate name.”

The largest industrial spill in modern U.S. history began with a leaky six-story earthen dam outside TVA’s Kingston Fossil Plant. On Dec. 22, 2008, that dam collapsed, releasing more than a billion gallons of coal ash sludge in a torrent that knocked nearby homes off their foundations. As the sludge slowly dried over the yearslong course of the cleanup, it turned into a fine dust that had to be constantly watered down but still filled the air, especially on windy days, according to trial testimony.

Some of the cleanup workers took on 12-hour shifts for months at a time with few or no days off. A Jacobs subcontractor testified at trial that workers were not allowed to wear masks to protect them from the fly ash “because it looked bad.” In Associated Press interviews, workers recalled constantly coughing and joking about “coal ash flu.” Later they began suffering strange lesions. Dozens developed cancers and at least 40 later died from illnesses.

Jacobs’ attorneys have said the company did its best to mange the cleanup in a way regulators said was safe. It has not been proven that Jacobs — or even coal ash — is to blame for any illnesses, and the EPA classifies coal ash as nonhazardous.

But Duke University geochemist Avner Vengosh, who is not involved in the litigation, found high levels of radioactivity and toxic metals, including arsenic and mercury in the Kingston coal ash. In a statement about his 2009 peer-reviewed study, he warned that inhaling airborne particles could have a "severe health impact.”

Still, if and when the workers get a new trial, it could be difficult to prove the ash caused their illnesses. Experts say there just is not enough research on the health effects of prolonged exposure to fly ash.