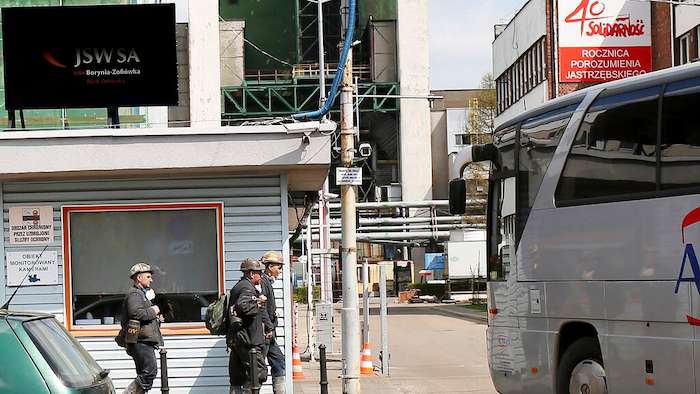 Rescuers going to join the search action for 10 miners gone missing after a powerful underground tremor and methane gas discharge at the Borynia-Zofiowka coal mine in Jastrzebie-Zdroj, southern Poland, Saturday, April 23, 2022. It was the second colliery accident in just four days in the Jastrzebie-Zdroj coal mining region, near the Czech border.
AP Photo

WARSAW, Poland (AP) — The death toll from two coal mine accidents last week in southern Poland has risen to 12 after the bodies of two missing miners were found at one mine and another worker at a separate mine died of his injuries, authorities said Monday.

The discovery of the two bodies means that at least six miners were killed during Saturday's tremor and methane gas discharge at the Borynia-Zofiowka mine. Rescue workers are still searching for four other missing miners.

Also, a miner injured by methane gas blasts Wednesday at the Pniowek mine died in the hospital on Sunday, said the Jastrzebska Spolka Weglowa (JSW) company, which operates both mines in Poland's southern Jastrzebie-Zdroj region, close to the Czech border.

His death brings the toll from repeated explosions at the Pniowek mine to six. The search for seven Pniowek miners still missing was suspended after more methane blasts on Thursday injured 10 rescue workers. Teams are building two solid partitions to seal off the blasts area from the rest of the mine, for safety reasons.

In addition to the victims, dozens of miners were injured, many of them hospitalized with burns.

Poland’s Prime Minister Mateusz Morawiecki said it was a “black week” for the nation’s coal industry that employs almost 80,000 miners, and said the families of victims will receive state support. He spoke as he visited the Central Mining Rescue Station in Bytom, in southern Poland.

Prosecutors have opened investigations into the accidents, and Morawiecki said that experts will check conditions and procedures at both mines. Most Polish coal mines are in the southern Silesia region and many have a high presence of methane in the rock.

Some 70% of Poland’s energy comes from coal, a proportion that has been sharply criticized by the European Union and environmental groups who are concerned about CO2 emissions and meeting climate change goals.

Poland has been trying to scale down its use of coal. Morawiecki recently said Poland has stopped coal imports from Russia and its ally Belarus in response to Moscow’s invasion of Ukraine, but Poland has for years been reducing its dependence on Russian energy sources.

Three workers were injured in separate incidents on consecutive days.
May 18th, 2022
Follow Us
Most Recent