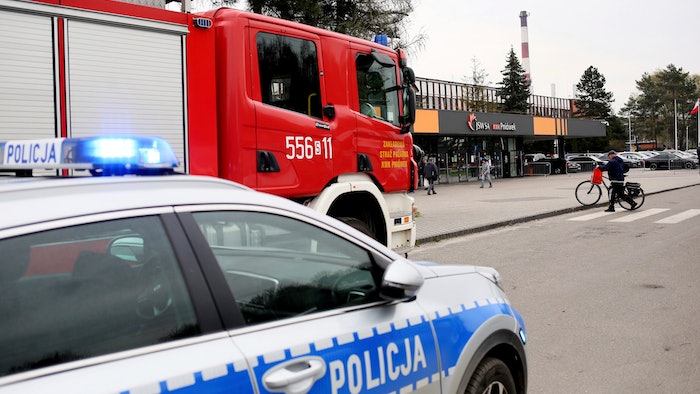 A police car and a firefighters' truck before the Pniowek coal mine in Pawlowice, southern Poland, on Wednesday, April 20, 2022, where two underground methane explosions killed five people and injured more than 20 early Wednesday.
AP Photo

WARSAW, Poland (AP) — Two methane explosions at a coal mine in southern Poland killed five people and injured more than 20 early Wednesday, according to the country's prime minister. Seven others were missing.

The first blast took place about 1,000 meters (3,000 feet) under the surface at the Pniowek mine in Pawlowice, Prime Minister Mateusz Morawiecki told reporters outside the mine's office building.

Morawiecki said a rescue operation was launched immediately. A second explosion occurred about three hours after the first, and communication was lost with some of the rescuers, he said.

The operation was suspended due to the resulting fire and dangerous conditions. Experts were evaluating the possibility of resuming the rescue mission.

The mine that is operated by the Jastrzebska Spolka Weglowa, or JSW, mining company. Prosecutors have opened an investigation.

More than 20 people were hospitalized with severe burns, the prime minister said. Doctors at the Siemianowice Slaskie hospital, which specializes in treating burns, said some of the patients have life-threatening injuries, including burns to their lungs and large areas of their bodies.

Rescue workers were are among the victims of the explosions, Morawiecki said.

“A tragedy happened here today,” he said as he extended words of sympathy to the families and stressed the dangerous nature of coal mining work.

Poland relies on its own and imported coal for almost 70% of its energy, drawing criticism from the European Union and environmental organizations concerned about CO2 emissions and climate change.

Most coal mines are located in the southern Silesia region. Many are at risk of explosions from the sudden release of methane.

The government recently announced it would end coal imports from Russia by May. The action is part of Poland's drive to wean off dependence on Russian energy sources, but also comes in response to Moscow's invasion of Ukraine.