The lawsuit seeks compensation for past cleanup costs and an abatement fund for future costs. 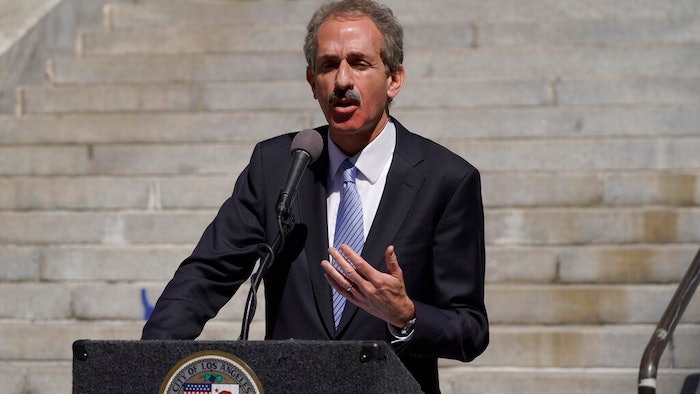 LOS ANGELES (AP) — The city of Los Angeles is suing Monsanto and two other companies for past and future costs of dealing with contamination of waterways by long-banned chemicals called polychlorinated biphenyls, or PCBs, the city attorney announced Monday.

Long-lasting PCBs were used in numerous products and applications for decades and are linked to a wide range of negative health impacts including cancer, City Attorney Mike Feuer said in a news conference outside City Hall.

The lawsuit was filed March 4 in Los Angeles County Superior Court and names Monsanto Co., and two others, Solutia Inc., and Pharmacia LLC, that resulted from a series of corporate acquisitions and consolidations that spun off the original Monsanto businesses, according to Feuer's office.

The lawsuit seeks compensation for past costs incurred by the city in cleaning up PCB contamination and an abatement fund for future costs. Feuer would not specify a dollar amount.

PCBs were used for decades in industrial and electrical equipment, hydraulic fluids, fireproofing, paper products, ink and paint. They were banned in the United States in 1979 under the Toxic Substances Control Act but remain the subject of extensive litigation.

Monsanto manufactured 99% of the PCBs used or sold in the U.S. between 1929 and 1977, according to the city attorney's lawsuit.

Feuer said that despite the ban, stormwater and wastewater systems continue to drain PCBs into Los Angeles Harbor, Santa Monica Bay, lakes and other waterways as well as soils associated with those areas.

“We've had to dredge soil from locations, for example,” he said.

Eating fish or swimming can cause exposure to PCBs, Feuer said, but he did not quantify how much exposure would raise health risks.

“It is time for Monsanto to clean up and pay up,” he said.

Bayer said in a statement that it was reviewing the lawsuit and believe it is without merit.

“Monsanto voluntarily ceased its lawful manufacturing of PCBs more than 40 years ago, and never manufactured, used, or disposed of PCBs into Los Angeles’ waters, and therefore should not be held liable for the contamination alleged by the city,” the statement said.

“Where it has been determined that those cleanups are necessary, federal, and state authorities employ an effective system to identify dischargers and allocate clean-up responsibilities,” Bayer added. "Litigation of the sort brought by the city risks undermining these efforts.”

Pfizer spokesperson Pamela Eisele said in an email that the alleged activity at issue predated Pfizer’s acquisition of Pharmacia, and noted that Pfizer is not a named defendant.

“Pursuant to the Separation Agreement between Monsanto and Pharmacia, Monsanto is required to indemnify Pharmacia for any liabilities primarily related to Monsanto’s legacy Agriculture or Chemicals Businesses,” Eisele wrote.

Eastman did not immediately respond.