The project is fully funded and will take roughly five to seven years to complete. 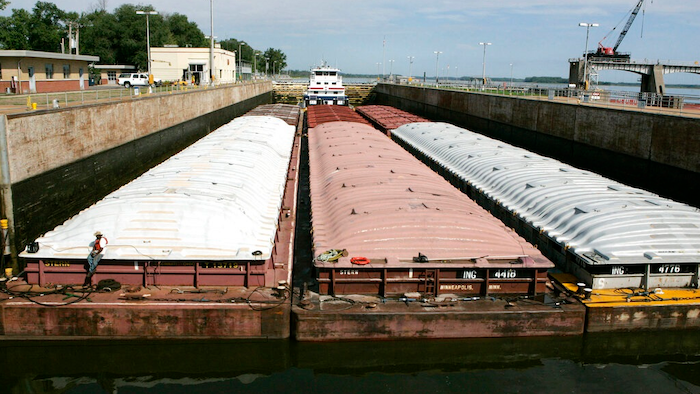 A towboat and its barges are shown in the channel at lock and dam 25 at Winfield, Mo., on Aug. 19, 2005. The U.S. Army Corps will spend $732 million to expand the congested lock and dam in Missouri. Federal officials said adding a second lock in Winfield will reduce travel time for barges and allow for two-way traffic. Funding for the lock's construction was part of a broader Biden administration announcement Wednesday, Jan. 19, 2022, to provide the Army Corps with $14 billon for infrastructure and environmental restoration projects.
AP Photo/James A. Finley, File

ST. LOUIS (AP) — The U.S. Army Corps said it will spend $732 million to expand a lock and dam system to help barges more efficiently transport millions of tons of corn, soybeans and other goods along the Mississippi River.

The lock expansion was part of the Biden administration’s broader announcement Wednesday that the Army Corps will have $14 billion from the infrastructure bill and other sources for Florida everglades restoration, upgrading ports and improving navigation on major waterways like the Mississippi, among other projects.

A second lock will be built next to the one that already exists in Winfield, Missouri. The new lock will allow for two-way traffic and will be bigger than the current one, easing the movement of larger, modern barges.

“By adding a second chamber, you can really ease up that congestion,” said Kirsten Wallace, executive director of the Upper Mississippi River Basin Association.

Currently, there is one, 600-foot chamber for barges to pass through. It isn’t large enough to allow large 15-barge tows to travel without having to disassemble first. Getting a standard tow through can take more than two hours, according to the Army Corps. When the new, 1,200-foot chamber is added, passage will take 30-45 minutes.

The project is fully funded and will take roughly five to seven years to complete, according to the Army Corps.

Upgrading the lock and dam on the 1930s-era piece of infrastructure is part of a larger project to improve ecology and navigation. Wednesday's announcement came after decades of planning and preparation. The Army Corps said initial feasibility work began in the late 1980s and design work in 2007. Finally, they can build, officials said.

“Up until this morning, we’ve never had the authorization to actually construct projects,” said Andrew Goodall, a program manager for the Army Corps’ long-term navigation and ecology improvement efforts. He said the funding “opens the door” to make a positive effect on the river.

Mike Steenhoek, executive director of the Soy Transportation Coalition, said barges can cheaply move large volumes of products long distances. He said in addition to saving time, the new lock will ensure that river traffic doesn’t come to a halt if the old lock has a problem.

“With a barge, if you have a closure at a lock and dam it is not like canoeing or kayaking where you can portage around the obstacle. River transit will close,” he said.

Steenhoek said he hopes Wednesday's announcement builds momentum for upgrades to other busy locks on the Mississippi and Illinois rivers.

In addition, $97.1 million will be spent on a fish passage system on an lock and dam about 10 miles (16.09 kilometers) south of Hannibal, Missouri, to ensure that fish can spawn and move more easily.

Sen. Roy Blunt, R-Mo., praised the funding in statement, adding that the new lock will lower transportation costs for farmers.

“This investment to improve the safety and navigability of the Mississippi River is great news for farmers, businesses, and Missouri’s economy,” Blunt said.

The Associated Press receives support from the Walton Family Foundation for coverage of water and environmental policy. The AP is solely responsible for all content. For all of AP’s environmental coverage, visit https://apnews.com/hub/environment