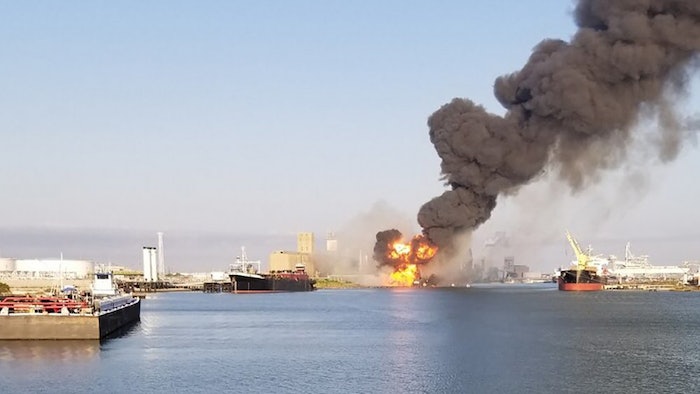 CORPUS CHRISTI, Texas (AP) — Inadequate communication, planning, and risk management by a dredge operator likely led to the cutting of a liquefied propane pipeline and an explosion that killed five people at a Texas port last year, the National Transportation Safety Board concluded Tuesday.

Of the 18 crew members employed by the dredge owner Orion Marine Group, three aboard the Waymon L Boyd and one aboard an adjacent anchor barge were killed. Six other crew members aboard the dredge were injured, one of whom later died.

The Waymon L Boyd was a total loss valued at almost $9.5 million, while the explosion caused more than $2 million in damage to the Enterprise Products pipeline.

In a statement Tuesday, the NTSB said Orion’s inadequate planning meant the dredge operators did not realize how close they were to the pipeline. Dredging plans provided by Schneider Engineering and Consulting were deficient, the NTSB said. As a result, Orion provided information to Enterprise Products in a “call before you dig,” a process for pipeline owners to guide excavators and dredgers around their facilities, which was incomplete and inaccurate. Consequently, proper measures were not taken to protect the pipeline.

The agency recommended that the companies involved in the explosion implement or update policies and procedures for dredging near pipelines.

In a statement, an Enterprise spokesman said the incident is the subject of ongoing litigation, and the firm would have no comment. Generally, though, “we share the NTSB’s objective in preventing similar incidents in the future.”

An Orion Marine Group statement said, “In cooperation with regulators, improvements in our safety program continue to be sought after and welcomed.”

Schneider Engineering and Consulting has not responded to a message from The Associated Press.