It went undetected for years. 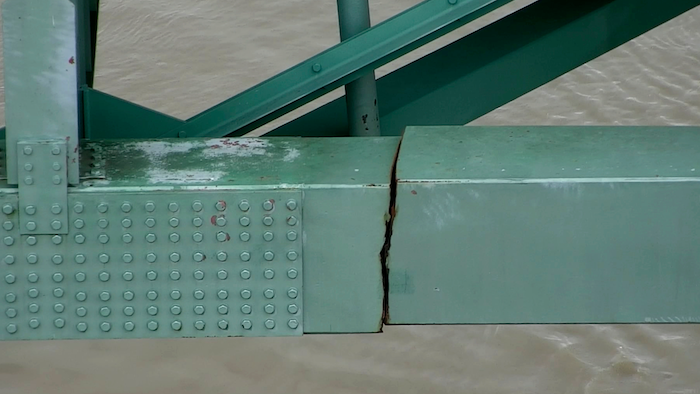 LITTLE ROCK Ark. (AP) — A crack in a steel beam that forced the closure of the Interstate 40 bridge connecting Arkansas and Tennessee for three months likely began when the span was fabricated in the 1970s and went undetected for years, a report by Arkansas' Transportation Department released Thursday said.

A forensic investigation by an outside firm hired by the department said the crack occurred in a weld between two plates during the bridge's fabrication. Those welds were more susceptible to cracking because of the type of steel and welding method used then, the department said.

“In all likelihood the cracking in the weld occurred within hours of its completion but was not detected by any post-weld repair fabrication testing and remained unchanged for a number of years," the department's report said.

The crack had been visible in 2016, and an inspector who had missed it was fired by the department in May. The report said the weld fracture initially was not visible by conventional inspection and was not caught by an ultrasonic inspection in 1982.

The I-40 bridge spanning the Mississippi River was shut down May 11 after inspectors found the crack in one of two 900-foot (275-meter) horizontal steel beams critical to the bridge’s structural integrity. Road traffic had been diverted to the nearby Interstate 55 bridge — about 3 miles (4.8 kilometers) south of the I-40 bridge — during the I-40 bridge’s repairs. The bridge fully reopened in August.

“We will now move forward with confidence and make the changes necessary to improve our program so that the past will not be repeated," Arkansas DOT Director Lorie Tudor said in a statement.

The problems with the weld were not detected when ultrasonic testing was performed on the bridge’s girder welds in 1982 because of defects found with similar bridges. The initial fracture occurred on the interior face of the box where it was not visible by conventional inspection. The report said the fracture spread in phases, starting with the weld, until it was discovered in May.

The reports and the retirements were first reported Thursday by the Arkansas Democrat-Gazette.

The department's report said the agency's failure to adequately respond to employees concerned with the fired inspector's job performance “perpetuated a culture where team members did not feel they had the authority or support to question a lead inspector’s procedures or thoroughness."

The department also said under its changes that “fracture critical" bridges like the I-40 span will not be inspected by the same person consecutively.

I-40 runs from North Carolina to California. Manufacturers and shippers rely on the interstate to move products and materials across the Mississippi River. About 50,000 vehicles typically travel across the bridge in a day. Arkansas is responsible for the bridge's inspections and Tennessee is responsible for maintenance and repairs.

The closure was expensive for the trucking industry, with the Arkansas Trucking Association at one point saying the closure cost the industry about $2 million a day.

Arkansas said the repairs to the bridge and inspections following the closure cost $10 million.

The Arkansas report said it was “highly unlikely" that a similar crack would occur on the bridge, but said the bridge's welds will continue to be inspected at arm's length and that ultrasonic testing should be done periodically.