Railroads Fight with Unions in Court over Vaccine Mandates

The unions argue the railroads should have negotiated with them. 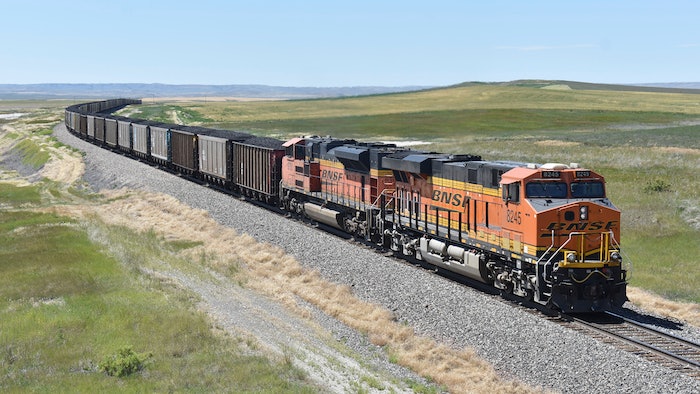 A BNSF railroad train hauling carloads of coal from the Powder River Basin of Montana and Wyoming is seen east of Hardin, Mont., on July 15, 2020. BNSF Railway has gone to court to determine whether it has the authority to require all its employees to get vaccinated against the coronavirus.
AP Photo/Matthew Brown File

OMAHA, Neb. (AP) — Another major railroad has gone to court to determine whether it has the authority to require all its employees to get vaccinated against the coronavirus.

BNSF railroad filed a lawsuit Sunday against its major unions over its mandate. It joins Norfolk Southern and Union Pacific, which both filed similar lawsuits against the unions last month. The unions, which have filed some of their own lawsuits in response, argue that the railroads should have negotiated with them before imposing their mandates.

The railroads that have imposed vaccine mandates say they are complying with President Joe Biden's executive order requiring all federal contractors to have their employees vaccinated. The railroads are not alone in facing resistance to vaccine mandates. Similar rules have generated disputes in a variety of workplaces.

BNSF said in its lawsuit that it regularly updates its requirements for workers when federal regulations change, so the vaccine mandate should be no different. BNSF said the unions don't dispute when it changes drug testing rules, and they didn't fight it earlier this year when the railroad imposed a mask mandate after the Federal Railroad Administration ordered it.

“BNSF has a long-standing and well-settled past practice of unilaterally changing its rules and policies governing position requirements, medical standards, and safety in response to lawful federal government directives,” the railroad said in its lawsuit.

The railroads have said that employees will be disciplined if they fail to comply with the vaccine mandate.

The unions didn't immediately respond in court to BNSF's lawsuit Monday, but in the other lawsuits they have argued the railroads were violating the terms of their contract by requiring vaccines and by offering bonuses to workers if they do get vaccinated. Both Union Pacific and Norfolk Southern are offering employees $300 if they get the shots.

“The non-negotiated bonuses and unilateral decision to discipline employees who are not vaccinated functioned to undermine the collectedly-bargained agreements and reduce Norfolk Southern’s obligations under those agreements,” the Sheet Metal, Air, Rail and Transportation Workers — Transportation Division, or SMART-TD, union said in its response to Norfolk Southern.

Leaders of the SMART-TD union and the Brotherhood of Locomotive Engineers and Trainmen have said they generally support workers getting vaccinated, but they don't think the railroads should require it without negotiating first.

Federal judges have yet to rule on any of these lawsuits related to the railroads' vaccine requirements.

BNSF, Norfolk Southern and Union Pacific are three of the largest U.S. railroads. Spokeswomen for two other major major U.S. railroads, CSX and Kansas City Southern, said officials at those railroads are still considering whether to impose vaccine mandates in response to the executive order, but both railroads are encouraging employees to get the shots.