The agency hasn't determined if Autopilot was engaged. 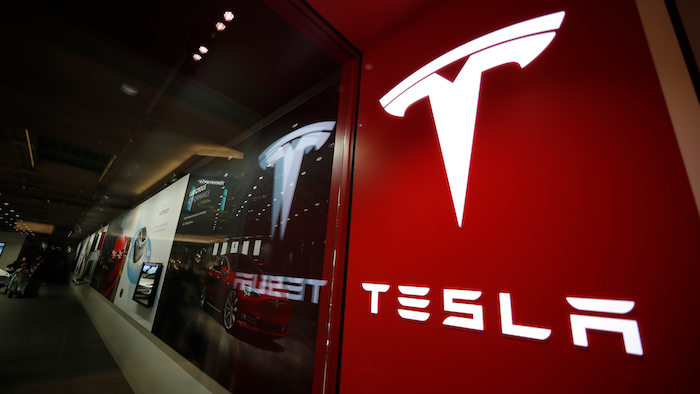 This Feb. 9, 2019, file photo shows a sign bearing the company logo outside a Tesla store in Cherry Creek Mall in Denver. A driver was behind the wheel when a Tesla electric car crashed and burned last April in Houston, killing two men, neither of whom was found in the driver’s seat. The U.S. National Transportation Safety Board announced the findings in an investigative report released Thursday, Oct. 21, 2021 on the April 17 crash on a residential road in Spring, Texas.
AP Photo/David Zalubowski, File

DETROIT (AP) — A driver was behind the wheel when a Tesla electric car crashed and burned last April near Houston, killing two men, neither of whom was found in the driver's seat.

The U.S. National Transportation Safety Board announced the findings in an investigative report update released Thursday on the April 17 crash on a residential road in Spring, Texas.

Although first responders found one man in the back seat and the other in the front passenger seat, the NTSB said both the driver and a passenger were in the front seats with belts buckled at the time of the crash.

The agency said the car was traveling up to 67 mph in the five seconds leading up to the crash, and the driver was accelerating. Data from the car's fire-damaged event data recorder revealed that at times, the accelerator pedal was pressed as high as 98.8%, the NTSB report said.

The investigation is continuing, and the agency made no determination as to whether Tesla's Autopilot partially automated driver-assist system was running at the time of the crash. The NTSB said it is still looking into Autopilot, whether the men could have had trouble getting out of the car, driver toxicology tests and other items. The agency will make those determinations in a final report.

The update report left unclear how or why the driver unbuckled the seat belt and changed seating positions, although it said the crash damaged the Tesla Model S's high-voltage lithium-ion battery case, where the fire started.

The fatal trip began at the owner's home near the end of a cul-de-sac, and home security video showed the owner getting into the driver's seat and the passenger entering the front passenger seat, the report said. The car traveled about 550 feet before leaving the road on a curve, going over a curb, hitting a drainage culvert, a raised manhole and a tree.

The crash occurred around 9:07 p.m. on Hammock Dunes Place, a two-lane residential road. Both the 59-year-old owner and the 69-year-old passenger were killed.

In a preliminary report from May, the NTSB said it tested a different Tesla vehicle on the same road, and the Autopilot driver-assist system could not be fully used. Investigators could not get the system’s automated steering system to work, but were able to use Traffic Aware Cruise Control.

Autopilot needs both the cruise control and the automatic steering to function. Traffic Aware Cruise Control can keep the car a safe distance from vehicles in front of it, while autosteer keeps it in its own lane. The report said the road also did not have lane lines. That could have have been why the automatic steering wouldn’t work.

The agency says it intends to issue safety recommendations to prevent similar crashes.

Local authorities said one man was found in the front passenger seat, while another was in the back.

Harris County Precinct Four Constable Mark Herman said at the time the car was traveling at a high speed. He would not say if there was evidence anyone tampered with Tesla’s system to monitor the driver, which detects force from hands on the steering wheel. The system will issue warnings and eventually shut the car down if it doesn’t detect hands. But critics say Tesla’s system is easy to fool and can take as long as a minute to shut down.

Consumer Reports said in April that it was able to easily trick a Tesla into driving in Autopilot mode with no one at the wheel.

The NTSB, which has no regulatory authority and can only make recommendations, said it’s working with the National Highway Traffic Safety Administration on the probe. NHTSA has the power to make vehicle safety regulations. The federal probe is running at the same time as a parallel investigation by local authorities, the NTSB said.

The Texas crash raised questions of whether Autopilot was working at the time, and whether Tesla does enough to make sure drivers are engaged. The company says in owner’s manuals and on its website that Autopilot is a driver-assist system and drivers must be ready to take action at any time.

Lars Moravy, Tesla’s vice president of vehicle engineering, said on the company’s April 26 earnings conference call that an inspection of the badly burned car found that the steering wheel was deformed, “so it was leading to a likelihood that someone was in the driver’s seat at the time of the crash.” He said all seat belts were found unbuckled.

On Twitter in April, Tesla CEO Elon Musk wrote that data logs “recovered so far” in the crashed show Autopilot wasn’t turned on, and “Full Self-Driving” was not purchased for the vehicle in the Texas crash. He didn’t answer reporters’ questions posed on Twitter.

NHTSA has stepped up its investigations into Tesla Autopilot. In August, it opened a formal investigation into the system after a series of collisions with parked emergency vehicles.

The investigation covers 765,000 vehicles, almost everything that Tesla has sold in the U.S. since the start of the 2014 model year. Of the crashes identified as part of the probe, 17 people were injured and one was killed.

NHTSA says it has identified 12 crashes since 2018 in which Teslas on Autopilot or Traffic Aware Cruise Control have hit vehicles at scenes where first responders have used flashing lights, flares, an illuminated arrow board or cones warning of hazards.